Voters reported waits of an hour and longer on Election Day in areas ranging from the Gulf coasts of Texas and Florida to parts of Missouri and South Carolina, up to Chicago, rural central Pennsylvania and New York City. Polling places opening late, voting machine outages, understaffing and sheer volume caused some voters to abandon the lengthy lines before casting their ballots.

In the Houston area, voters waited over half an hour for polls to open as staff struggled to get voting machinery online. Voters who were late for their jobs left polling places in Brooklyn as high turnout and downed ballot scanners led to waits of up to two hours.

While it is hard to know if the problems exceed usual Election Day hiccups, the issues in states that allow early voting, like Florida and Texas, are unexpected, said Michael McDonald, a political scientist at the University of Florida.

Behind the scenes, officials were addressing potential gaps in computer security. By noon Tuesday, several states reported to U.S. election-security officials that hackers tried to scan their computer systems for software vulnerabilities. Days before, a county clerk’s office said its email account was compromised and its messages forwarded to a private Gmail address, according to person familiar with the matter who was not authorized to discuss the matter publicly.

Although early voting in some states had outpaced 2014 — and experts anticipated problems if that trend continued into Election Day — the number of voters turning out at polling places on Tuesday caught many election administrators flatfooted.

The problem was particularly acute in the Houston area. At Lone Star College-Cypress Center, outside Houston, polls opened 45 minutes late because of what one voter attributed to understaffing and bewilderment among poll workers about how to operate voting machinery.

“There were people standing in line for an hour only to find out they were at the wrong polling place,” said Brianna Smith, a 31-year-old tax specialist and mother of three. “It was very discouraging for people to see a line wrapped around the corner when they have to go to work.”

Hector de Leon, the spokesperson for the Harris County Clerk’s Office in Texas, said the county had resolved the morning’s issues. Delayed openings at some precincts, he added, are common. “Clerks are running late — they get there at 6:45 instead of 6 o’clock,” he said. “Clerks forget how to connect the equipment properly,” though he noted the county has technicians on call to help poll workers befuddled by voting machines. 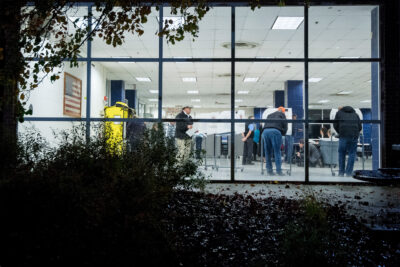 Neil Brown, the president of the Poynter Institute for Media Studies, tweeted: “Single scanner breaks down at precinct” in St. Petersburg, Florida, with “some abandoning vote cause they need to work.” (The problem had been resolved by midday, and election officials hadn’t received reports of wait times prompting voters not to cast a ballot, said Dustin Chase, a spokesperson for the Pinellas County, Florida, supervisor of elections.) A Pennsylvanian named Jennifer Culbertson reported seeing fellow voters leave long lines before filling out their ballots at Spring Garden Township municipal building in York, Pennsylvania.

Farther north, voters in Brooklyn reported that, at one point Tuesday morning, all the machines that scan ballots at PS 22 were down. “They’re literally having people fill out the ballot and stuff them in locked ‘emergency’ ballot boxes that half the people in line don’t trust,” Rachael Berkey, who estimated that the wait was over two hours, wrote in an email.

Humidity may be the culprit in places like Brooklyn. “The scanner that’s being reported as jamming wants to operate in the range of 10 to 15 percent humidity, and we’re hearing about problems in New York, Boston and North Carolina, where humidity is really high today,” said Charles Stewart, a professor of political science at the Massachusetts Institute of Technology.

In a balmy school gym at PS 11, the morning line topped 200, spilling out the schoolhouse doors and onto the sidewalk. The wait was an hour and a half.

The line was “probably longer than when Obama was on the ballot,” Emily Chen said.

Election officials for New York City were not immediately available for comment.

Some voters at the school described seeing people leave the polling place because of what longtime residents described as historic turnout.

“This is the longest line in generations,” Catherine Saunders, a 68-year-old Brooklynite, said. “I’ve been voting here for 27 years.”

Voters saw similarly historic turnout numbers elsewhere in the Northeast. Theresa Marshall, of Wells, Maine, had “never seen it so busy at the polls, even for presidential elections.”

In James Island, just outside Charleston, South Carolina, where the wait reached an hour and a half on an unseasonably warm Tuesday morning, Jennifer Dukes, a 34-year-old photographer, was among a number of locals who sought to persuade their fellow voters to stick out long lines by passing out snacks and water. She saw others playing games on their cellphones to pass the time.

According to Stewart, the best recourse for voters who ran into long lines Tuesday morning is to head back to the polls during the early afternoon. Nationwide statistics show the shortest waits during those hours on Election Day, before a post-work bump later in the afternoon.

Jack Gillum contributed to this story.