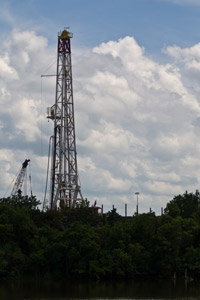 Hundreds of people have been evacuated from their homes in rural western Louisiana after a natural gas well blowout contaminated a drinking water aquifer there on Monday.

Sheriff's officers in south Caddo Parish, near Shreveport, began knocking on residents' doors at 5 a.m. Monday morning after employees from Dallas-based Exco Resources called authorities to say they couldn't contain bubbling gas and extreme gas well pressure underground. Workers at the drill site had noticed the problems the previous evening, but waited approximately 12 hours before calling emergency crews and warning them to evacuate people who lived nearby, according to a Caddo Parish Sheriff's Department spokeswoman.

"It is dangerous to drink the water. You can't bathe in it, you can't wash your clothes. You basically cannot use the water at all," said the spokeswoman, Cindy Chadwick.

It is not yet clear what contaminants are in the water, other than methane gas. Exco officials told local news outlets today that they did not know what contaminants had reached the water. Neither Exco nor the state Department of Environmental Quality immediately returned calls for comment. In the meantime, the Sheriff's Department was taking maximum precautions.

"They suggest that people not smoke or have any kind of open flames," Chadwick said. "But what exactly it would do to you physically? I don't know."

According to the U.S. Environmental Protection Agency, methane gas alone does not pose a health threat if people drink water that contains it, or if they come into contact with it, say, in the shower. If water contains methane in high enough concentrations, the methane can evaporate and collect in enclosed spaces like a basement or bathroom, creating a dangerous risk of explosion.

According to local news reports, Exco was drilling about 1,200 feet down when it struck an unexpected layer of gas. Forty homes were advised to evacuate on Monday, but when Louisiana Department of Environmental Quality officials detected contaminants in the surrounding Wilcox aquifer later in the day, an additional 105 families were asked to leave. All of the evacuations were voluntary, and the families were being housed in three local hotels. Law enforcement officials said there could still be more evacuations to come.

South Caddo Parish was the site of another high profile drilling accident one year ago this week, when 16 cattle were found dead at a Chesapeake Energy well site after reportedly coming into contact with drilling fluids used in hydraulic fracturing.