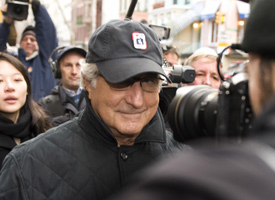 Fairfield Greenwich Group has billed itself as an innocent victim of Bernie Madoff's alleged $50 billion Ponzi scheme. Yet today's New York Times suggests that the so-called feeder fund for Madoff might share some blame for the fleecing.

Fairfield, a "secretive" hedge fund advisory business, was founded by Walter Noel in 1983. In 1989, Noel was introduced to Madoff by his new partner, a former employee of SEC's enforcement division. Fairfield began investing with Madoff in the early 1990s and did remarkably well for itself: In just the last five years, it raked in $500 million in fees from those investments, writes the Times.

Fairfield's Sentry fund was the conduit for this cash. It acted as middleman, handing over all of its invested funds directly to Madoff and taking a fee for providing access and, supposedly, performing due diligence. It reportedly held $7 billion in assets in 2007.

Fairfield had long arms, reaching into the pockets of investors across Europe, Asia and the Middle East, thanks in part to the Noel children's global marriages. Fairfield promised its investors much-coveted access to Madoff and, says the Times, "detailed pledges about how it would monitor and track Mr. Madoff's investments":

[Fairfield] said that it would independently calculate the value of the funds it invested at Mr. Madoff's firm at least once a week. It promised to reconcile statements from individual trades with Mr. Madoff's custodial records...

But, the Times writes, it's "not clear what Fairfield did to make good on those pledges."

In addition, a partner at a firm that considered buying a stake in Fairfield earlier this year said that Fairfield was not exactly an open book:

"They were just incredibly squishy and vague even during the warm-up," said the prospective buyer, who spoke on condition of anonymity because of a non-disclosure agreement with Fairfield. "I asked them to tell me about the manager of the fund Sentry feeds into, and I was told, 'We don't really talk about him.'"

That manager is now the most talked about man on Wall Street, and Fairfield is by far the biggest loser in his scheme: It could be out an estimated $7.3 billion. Or more precisely, its clients could be. What happens to Fairfield and its managers is still an open question. As the Times puts it, "If the wealthy Jewish world [Madoff] occupied was his launch pad, the wealthy promoters he cultivated at Fairfield Greenwich were his booster rocket."