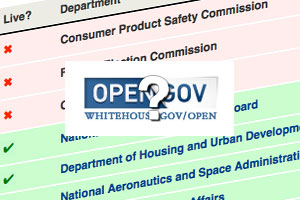 To the novice observer of transparency, the Obama administration’s directives ordering a more open government should apply to all agencies -- right? Not necessarily, according to the White House Office of Management and Budget.

Last December, OMB ordered government agencies to create “open government” pages, which it said should provide opportunities for public input. Via our handy Transparency Tracker, we’ve been following which agencies have followed through and created open government pages. The directive required them to do so by Feb. 6.

After that deadline passed, some agencies still did not have open government sites. It’s now been more than two weeks since the deadline, and at our last check this morning, 27 of 64 independent agencies don’t have such sites.

The White House, too, has tracked agencies’ transparency progress, but its Open Government Dashboard lists only 29 agencies – all of which have open government sites.

“In terms of the agencies for which we are actively tracking compliance, this would be the 24 largest agencies” plus five departments within the Executive Office of the President, said OMB spokesman Tom Gavin.

We’ve gone back and forth with OMB about why so many agencies still don’t have sites. Gavin told us that independent agencies were not required to create transparency Web sites.

Required or not, President Barack Obama certainly wants them to. As he said in his January 2009 memo on transparency:

So which agencies need to be transparent remains unclear.

“It’s disingenuous with those who are trying to hold them accountable if they keep moving the goal post down the field,” said Charles Davis, executive director of the National Freedom of Information Coalition, an open government advocacy group. “A truly transparent dashboard would say: ‘We won this one.’ ‘We’re still leaning on these people to do what the hell we asked them to do.’”

While our tracker followed a sampling of agencies, we also checked to see whether all the independent federal agencies have open government sites. We found open sites for 37 of 64 independent agencies. (Eight of those pages went up went up today, after we contacted OMB.) Some lesser-known agencies, such as the Office of Government Ethics, complied with the directive. Others, such as the Office of Compliance, did not. The directive told agencies to create open government sites at the agency’s Web address plus “/open.” It is possible that some agencies have open government pages at other addresses that we did not find.

The next deadline set by the OMB directive is March 8. By that date, OMB is supposed to provide a framework for “how agencies can use challenges, prizes and other incentive-backed strategies to find innovative or cost-effective solutions to improving open government.”

See a list of all deadlines on our Transparency Roadmap.