The United States Marine Corps has taken steps to combat racial extremists in its ranks, issuing an updated order emphasizing that participation in white supremacist and other groups is prohibited and encouraging service members to report fellow Marines involved with such groups.

The actions come after an active-duty Marine was documented taking part in last year’s deadly white supremacist rally in Charlottesville, Virginia, and two others were arrested after hanging a racist banner off a building in North Carolina.

“The order reaffirms the Marine Corps’ commitment to maintaining a culture of dignity, respect and trust in which all members of the organization are afforded equal opportunity to achieve their full potential based solely upon individual merit, fitness, intellect and ability,” Maj. Brian Block, a Marine spokesman, said.

A ProPublica and Frontline investigation this year revealed that Vasillios G. Pistolis, a Marine based at Camp Lejeune, North Carolina, had engaged in a series of assaults during the Charlottesville rally. Pistolis, who had been a member of the white extremist group known as Atomwaffen Division, was subsequently subjected to a court-martial and forced from the Corps. Pistolis told ProPublica and Frontline that he had left the racist group and that he had not been present in Charlottesville. However, there are photographs, video and text messages that make clear he was indeed there.

Last year, the Marine Corps Times reported that Staff Sgt. Joseph Manning and Sgt. Michael Chesny pleaded guilty to trespassing charges for hanging a banner with a white power slogan from a building in Graham, North Carolina, in May 2017. The two Marines have since been “administratively separated” from the organization, Block confirmed.

Like every branch of service, the Marine Corps has regulations that bar its members from participating in racial extremist groups, but the updated policy clarifies language on prohibited conduct, chiefly by explicitly identifying “supremacist” activity as forbidden. It also consolidates many previous orders, a large number of which haven’t been updated in years, and aims to tighten accountability when rules of conduct are violated. The updated policy encourages service members who see their peers engaging in prohibited behavior to report them through various channels.

Pete Simi, co-author of the book “American Swastika” and an associate professor at Chapman University in California who has studied extremist groups for the last 20 years, said, “The order is significant only if there is a plan to both root out and prevent folks from taking part in extremist activity.”

The amended order isn’t part of the Uniform Code of Military Justice, the federal law that defines criminal offenses under the U.S. military’s legal system.

“As an order, violation of the prohibited activities and conduct is punishable under the UCMJ, but this is not in and of itself a change to the UCMJ,” Block said. 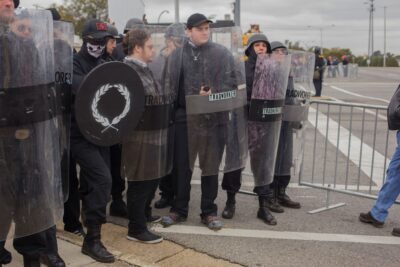