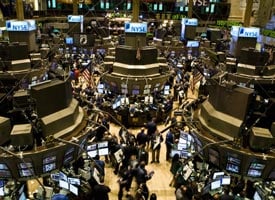 With the financial markets teetering on the edge of a meltdown, many are wondering again about the root causes: Most importantly, where were the regulators while all this trouble brewed?

Lehman Brothers problems stem from heavy investment in mortgages. Like many other investment banks, Lehman bought mortgages in bulk, re-packaged them, and re-sold them. According to Reuters, in 2006 and 2007 Lehman was the âtop U.S. underwriter of mortgage bondsâ and controlled fully ten percent of the market.

But of course the roots of the marketâs crisis go far deeper. Over the past decade, a âshadow banking systemâ has developed outside the reach of regulators.  As the New York TimesÂ´ Paul Krugman explains today, while regulators have long focused on banks, banks ânow play only a minor role in channeling funds from savers to borrowers; most of the business of finance is carried out through complex deals arranged by ânon-depositoryâ institutions, institutions like the late lamented Bear Stearns — and Lehman.â

Those institutions have in turn created wildly complex investments that are largely beyond the purview of regulators and little-understood. According to todayâs Washington Post, the market for one type of those investments, corporate derivatives, is worth $50 trillion and is a âmodel of obscurity.â

Writing this morning, the Timesâ top financial correspondent pointed his finger squarely at the lack of regulatory control: âIt was a lack of regulation of the shadow financial system and its players that allowed this to happen.â

Back in March, the New York Times explained how regulators ended up on the sidelines: Both Republicans and Democrats in Washington ended up âsupporting deregulation, even as newly minted but little-understood products like derivatives proliferated.â

âA milestone in the deregulation effort came in the fall of 2000,â says the Times, with the passage of âa little-noticed piece of legislation called the Commodity Futures Modernization Act.â What the bill did was simple, says the Times: It âkept much of the market for derivatives and other exotic instruments off-limitsâ to regulators.

That bill, combined with more well-known legislation that abolished firewalls between investment banks and commercial banks, gave the investment banks room to create financial products that, as the Times put it, âare virtually hidden from investors, analysts and regulators.â

In one congressional hearing the Times recounts, the-then CEO of Citigroup, Charles Prince, was asked by Rep. Barney Frank (D-MA) why billions of dollars of investment liabilities hadnât been previously disclosed:

âWhy arenât they on your balance sheet?â asked Mr. Frank, Democrat of Massachusetts. The congressman recalled that Mr. Prince said doing so would have put Citigroup at a disadvantage with Wall Street investment banks that were more loosely regulated and were allowed to take far greater risks. (A spokeswoman for Mr. Prince confirmed the conversation.)

It was at that moment, Mr. Frank says, that he first realized just how much freedom Wall Street firms had, and how lightly regulated they were in comparison with commercial banks, which have to answer to an alphabet soup of government agencies like the Federal Reserve and the comptroller of the currency.

âNot only did Wall Street have so much freedom, but it gave commercial banks an incentive to try and evade their regulations,â Mr. Frank says. When it came to Wall Street, he says, âwe thought we didnât need regulation.â