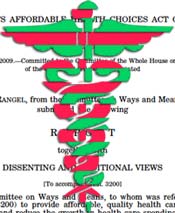 The payroll tax increase that was formerly known as "Medicare tax" in both President Obama’s health care reform reconciliation proposal and the original House reconciliation bill is NOT A TAX. Repeat: NOT A TAX.

But among the 15 pages of changes to the Reconciliation Act included in the manager’s amendment released over the weekend was a wee name change: references to ‘Medicare tax’ were deleted, and replaced with the much gentler, and voluntary-sounding, ‘unearned income Medicare contribution.’

We called Speaker Nancy Pelosi’s office for more insight, and will pass along anything we hear back.

For a look at all the changes that the reconciliation bill would make in the health care reform law, check out our side-by-side comparison.