WASHINGTON — When New Jersey Rep. Donald W. Norcross appeared at a 2015 groundbreaking for a company building its new international headquarters on Camden’s waterfront, he called it the “perfect partner” to help the poverty-stricken city return to its midcentury prosperity.

That same month, the Democratic congressman went to the House floor to praise Holtec International and its chairman, Kris Singh, a campaign contributor who was seeking federal approvals and funding for nuclear cleanup initiatives around the country. The company had promised to bring hundreds of new manufacturing jobs to South Jersey, including highly paid engineers to advance its nuclear technologies.

Singh, the congressman said, had been looking for a place to manufacture advanced small modular nuclear reactors, known as SMRs, an innovation that could transform the global nuclear industry.

“Dr. Singh is going to start out with 400 new employees and go to 1,000 after a few years, creating these new SMRs,” Norcross said. “He literally could have gone anywhere in the world, where many of his products currently go. He is coming to Camden, New Jersey, here in America.”

Four years later, few besides Norcross have heaped such praise on Holtec.

The company’s transparency has been called into question in recent weeks based on a false answer it provided about its federal contracting history to a New Jersey state agency that granted it $260 million in tax breaks, as WNYC-ProPublica first reported. Since then, Holtec’s past representations in two other states have been called into question. Meanwhile, Holtec’s promises to employ a significant number of Camden residents look increasingly unlikely, despite tax incentives the company gained through the state bill Norcross and his brothers helped create.

Last week, Norcross released a statement praising the company headed by one of his biggest political backers. “I am proud of the progress happening in Camden City — we’re seeing more family-sustaining jobs and an unprecedented turnaround in public safety and educational opportunities, all of which are improving the lives of our residents.” Holtec “is providing the community with careers in manufacturing, so I hope they continue to grow jobs in South Jersey.”

Holtec, a privately held company, is engaged in developing new reactors, decommissioning old ones and disposing of radioactive materials, including at the Chernobyl site in Ukraine. Its ambitious efforts to buy up shuttered plants and fast-track their cleanup has sparked new controversies about its business practices in communities around the U.S.

The admiration between Norcross and Singh appears to go both ways. Singh has been an enthusiastic supporters of Norcross, who was a state senator and an official of the International Brotherhood of Electrical Workers before he ran for Congress. Singh contributed more than $10,000, the legal maximum, to help Norcross win his first federal election in 2014.

The congressman has been featured at Holtec events. He was on hand for the groundbreaking of the new plant as well as to welcome federal Energy Secretary Rick Perry for a tour upon its completion.

Norcross is the brother of George E. Norcross III, the Democratic Party boss in South Jersey. George Norcross serves on Holtec’s board of directors and was Singh’s business partner in a brief ownership takeover of The Philadelphia Inquirer, a longtime critic of New Jersey’s Democratic Party machine.

Businesses connected to George Norcross and another brother, Philip, a prominent New Jersey lawyer-lobbyist, captured about $1.1 billion in tax breaks from the New Jersey Economic Development Authority. Last week, the state opened a new inquiry into six tax breaks, five of which were connected to Norcross. Holtec is one of them.

As a state senator, Donald Norcross co-sponsored the law that created the state economic incentive program. Philip Norcross has said he helped draft the legislation and his name is on the application as the company’s representative.

How Companies and Allies of One Powerful Democrat Got $1.1 Billion in Tax Breaks

Meet George Norcross. Nearly two thirds of $1.6 billion in tax incentives in his hometown of Camden, New Jersey, went to his own company, business partners, political allies and clients of his brother.

Holtec was among the tax break beneficiaries, as was an insurance brokerage firm owned by George Norcross, which built new offices in Camden. Holtec’s award was the second-largest tax break ever given to a company in New Jersey.

Donald Norcross had been largely silent as the tax break controversy escalated, and a lawyer for the Norcross brothers tried to downplay his role in pushing the tax break legislation.

Holtec opened its Camden headquarters with fanfare in 2017, but its hiring record has been a continuing sore point for Camden residents and their local congressman.

To qualify for tax breaks, Singh promised to create 235 new jobs in Camden and retain 160 other employees that it might otherwise have moved out of state.

But the hiring process quickly took on racial overtones when Singh criticized the quality of the talent pool in Camden, which is largely black, Latino and Asian. Donald Norcross made a flat-footed response that he had to scramble to modify.

“There is no tradition of work in families,” Singh said in a 2018 interview with ROI-NJ.com, a business media outlet. In Camden, he said, “If we hire 10, we keep two. The other eight weed themselves out.”

Donald Norcross seemed to agree that many potential workers in Camden, which has one of the state’s highest unemployment rates, had grown up with a “lack of structure.” But he quickly retreated amid the furor and defended the work ethic of his constituents.

Holtec has given various estimates of the number of people it ultimately expects to employ, and it remains unclear how many jobs the company has given to Camden residents. A recent newspaper account said it had 450 people working at its plant.

Holtec has applied for temporary H-1B visas and green cards for some of the most skilled jobs. U.S. Labor Department figures show Holtec has been approved for 78 such positions since 2016, though companies typically apply for more positions than they fill. The company did not respond to requests for comment.

Holtec’s work in Camden is only one aspect of its far flung international business. Its work in Ukraine includes preparing to manufacture small reactors and building a spent fuel storage facility for the cleanup of the Chernobyl site. The connections with Ukraine are so extensive that Holtec played the Ukrainian national anthem along with the American one at its Camden opening ceremony.

Holtec is building global interest in its small modular reactors, a more efficient form of producing nuclear energy. It is seeking federal approvals to decommission a half-dozen nuclear plants in the U.S. as well as permission to create in New Mexico an interim disposal site for high-level radioactive material. A New Mexico official last week asserted that the company had misrepresented its mineral rights at the site in communications with the Nuclear Regulatory Commission. With manufacturing plants in Ohio and Pennsylvania, the company is currently a leading world manufacturer of huge “dry cask” containers for storage of spent nuclear fuel.

Donald Norcross’ recent statement praised Holtec’s work. “Our country has struggled with developing a comprehensive plan to deal with spent nuclear fuel and there is great concern that leaving it scattered around the U.S. is not a sound, long-term solution.” 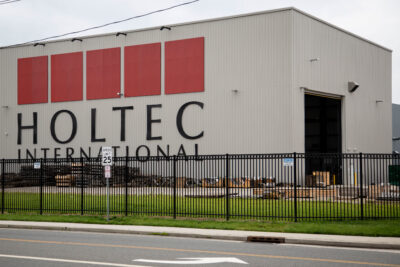 Singh’s company used the tax breaks to build its new headquarters in Camden, 16 miles from its previous location in Marlton, New Jersey. WNYC-ProPublica reported last week that Holtec also told New Jersey state officials that the state of Ohio was vying for its new headquarters, neglecting to mention that Ohio had rescinded a previous Holtec tax break because the company had not created promised jobs.

In the House, Donald Norcross has been involved in legislation of interest to Holtec. Holtec’s plans to open an interim nuclear waste disposal site in New Mexico may depend on Washington clearing the way for a permanent repository — such as the long-stalled Nevada site at Yucca Mountain. Norcross visited Yucca Mountain last summer as part of a congressional delegation.

For Holtec, the tax scandal fallout reaches well beyond New Jersey. Citizen and nuclear watchdog groups have seized on Holtec’s recent troubles to question its trustworthiness and financial fitness in decommissioning reactors and taking over their spent fuel.

Holtec has created limited liability subsidiaries to buy shuttered plants from utilities, and in partnership with a Canadian firm, SNC-Lavalin, it has spun off a subsidiary to decommission plants using trust funds set aside by utilities.

Mary Lampert, director of Pilgrim Watch, a Massachusetts grassroots group that is pushing for safe cleanup of the Pilgrim nuclear site, said her organization is closely following Holtec and the New Jersey tax break scandal.

“They have a hell of a lot on their plate, number one,” she said of Holtec. Activists there fear that Pilgrim’s cleanup trust fund of just over $1 billion will not cover all of the cleanup costs, she said. The Massachusetts attorney general has petitioned the NRC to be allowed to intervene to seek some financial safeguards from the selling utility or Holtec.

At Indian Point, citizen groups also are monitoring Holtec, said Richard Webster, a lawyer with an environmental group. “We want to get some guarantees,” he said.

Last month, the NRC refused to block the transfer of the Oyster Creek, New Jersey, plant license to a Holtec subsidiary. The Concerned Citizens of Lacey Township had asked the commission to delay while the state tax break investigation is underway.

Holtec’s partner, Lavalin, had already been drawing objections. The global engineering firm is experienced in nuclear plant decommissioning, but the company and its former executives are facing trial in Canada for allegedly paying tens of millions of dollars in bribes to win contracts from Libyan ruler Moammar Gadhafi’s regime, charges the company has denied. The case will be tried before a judge in September; the administration of Prime Minister Justin Trudeau has been drawn into the scandal through its failed efforts to get prosecutors to settle the case.

Meanwhile, Lavalin is retrenching dramatically, shedding employees and top executives. Nevertheless, the NRC gave Holtec the go-ahead to take over Oyster Creek. It said Lavalin’s problems in Canada were immaterial.