HOUSTON — At least 25 parishioners filed into a beige-brick church here Wednesday evening and were handed rubber gloves at the door. A handwritten sign directed them to designated areas with seats that had been spaced 6 feet apart. Another sign laid out five things people should do to keep from spreading the new strain of coronavirus, including staying away if they felt sick.

The founding pastor of City on a Hill, Juan Bustamante, was in a particularly good mood. A day earlier, Texas Gov. Greg Abbott joined 30-plus other governors around the country in issuing a statewide stay-at-home order — though he declined to refer to it as such — that also designated religious services as essential. Under the order, Texans must stay home unless they work in certain business sectors or are grocery shopping, running must-do errands or exercising outdoors. Or going to church.

Abbott’s order came the same day the country’s top health experts estimated the deadly virus could kill between 100,000 to 240,000 Americans, and that’s assuming people across the country adhere to social distancing guidelines. Otherwise, the numbers could climb much higher, to more than 2 million dead.

Amid the rapid spread of COVID-19 in Texas — with nearly 4,700 confirmed cases and 70 deaths as of Thursday — many congregations across the state, large and small and of a variety of faiths, closed their doors of their own accord weeks ago and moved all services online.

But there are some religious groups in Texas — it’s unclear just how many — who say it’s their right to remain open because they believe they provide an essential service to their communities at a time of great need. And on Wednesday night, several houses of worship across the state welcomed parishioners.

Top scientists and public health experts have warned that religious services appear to be particularly conducive to COVID-19 transmission, with multiple documented cases of spread in houses of worship across the globe.

Harvard University epidemiologist Bill Hanage ticked off examples of virus transmission in houses of worship in London, South Korea, Singapore and the state of Georgia and said exempting religious services from shelter-in-place orders is “an incredibly bad idea.” Nearly four dozen people also were hospitalized in Washington state last week after they met for a two-and-a-half-hour choir practice in a church. Two members have died.

Vice President Mike Pence chimed in on Wednesday, saying in-person religious services — which have been deemed essential by more than a dozen states — should be limited to 10 people and held online if at all possible.

For Bustamante, closing the doors of the church he opened almost a decade ago was never an option.

That’s partly because half of his 100-plus parishioners don’t have internet access at home, he said, but more so because there’s no true replacement for in-person worship, particularly during a time of crisis.

“I truly believe the churches are first responders,” he said Wednesday before the evening service. “I have a deep conviction to keep going and keep standing for what we believe in.”

To him, people are more likely to catch and spread the virus at grocery or liquor stores, which are also exempt.

Bustamante was among three Houston-area pastors named in a petition filed on Monday with the Texas Supreme Court, along with conservative activist Steven Hotze, that asked the justices to strike down an order enacted by Harris County Judge Lina Hidalgo. The order, similar to others enacted by large Texas counties and cities, doesn’t consider religious services — or firearm sales — as essential, which the petition alleges is a constitutional violation.

Jared Woodfill, the attorney for Hotze and the pastors, said on Wednesday that he’s now getting calls “left and right” from churches that want to join the lawsuit — most are evangelical Christian, though a few are Catholic — and plan to continue, or resume, in-person services. At least five more had come on board in addition to the three that signed the petition, he said.

“All of the folks I work with are moving forward with services,” he said, noting the Easter holiday is coming up.

Hidalgo’s order is now seemingly moot, superseded by Abbott’s, though local officials have scrambled to figure out how exactly to interpret the governor’s directive. Some have said they take issue with the religious exemption and are still ordering religious leaders to cease in-person services while they assess the order.

San Antonio Mayor Ron Nirenberg called the governor’s exemption for religious services “concerning.” The order’s wording is confusing, he said, and seemed to conflict with advice from the Centers for Disease Control and Prevention, as well as his city’s orders.

“If we want to keep people alive, we’ve got to do services remotely,” particularly now, Nirenberg told ProPublica and The Texas Tribune. “We’re entering a very dangerous phase of community spread.”

The cities of Dallas and Fort Worth said they are also assessing the legality of Abbott’s order, with Fort Worth telling houses of worship they can’t hold in-person services.

But some conservative communities in the greater Dallas and Fort Worth region, like McKinney and Frisco, have already changed their regulations after a local religious liberties law firm encouraged them to.

McKinney Mayor George Fuller said he didn’t know of any churches that planned to hold in-person services and that the city is telling them to avoid it, but also that he supported “religious liberty and freedom.”

Later Wednesday, Abbott’s office released joint guidance with Texas Attorney General Ken Paxton that said houses of worship must be given special consideration for constitutional reasons and are indeed “essential services.” However, they must conduct activities online or at home “whenever possible” and some should avoid large gatherings, namely those located in areas with rapid community spread.

As for the 10-person gathering limit Abbott had previously imposed, it appears only to apply to churches located in areas with rapid community spread though Abbott’s office did not respond to a request for clarity.

“Houses of worship should work with counties and municipalities to evaluate the rate of local community spread and determine the appropriate level of mitigation strategies to implement,” the guidance said.

But Harvard’s Hanage said gatherings of any size are problematic. And the way people interact in churches, synagogues, mosques and other religious facilities — shaking hands, hugging, singing — appears conducive to what epidemiologists call “super-spreading events,” he said.

“We know that church services are places where this gets spread,” he said. “People need to understand that it’s a risk.”

Hanage said that congregations could possibly protect themselves by gathering outdoors — say, in a field — and ensuring parishioners keep their distance, but that “it’s hard to do it correctly.” 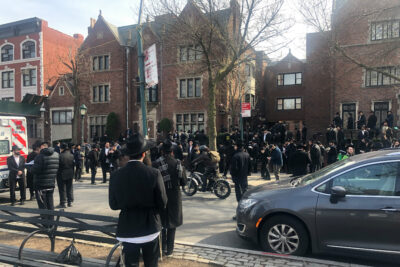 In Sacramento County, public health experts said on Wednesday that about a third of the 300-plus cases there can be linked to religious gatherings. That led to a special advisory banning worship services even though they already were not allowed under state shelter-in-place orders.

Beyond Christians, different faith groups in the Houston and San Antonio area continue to abide by the stricter guidelines, despite Abbott’s directive.

Some members of the Muslim, Christian, Jewish and Catholic communities consulted with one another and all came to the same conclusion, said Shariq Abdul Ghani, director of the Minaret Foundation, a Houston-based organization that focuses on building relationships through interfaith and civic engagement.

“Everyone has a feeling that for us, the faithful, our responsibility to our congregants is to keep them safe first and foremost,” he said. Many had adapted and moved services online using Facebook Live, Zoom and Google Hangouts.

The mosques will continue to offer services for the elderly and underprivileged, considered essential, he said, but even that will be abiding by social distancing guidelines and only with the most essential volunteers.

Rabbi Mara Nathan, of San Antonio’s Temple Beth-El synagogue, said the congregation had been holding services in the sanctuary with just clergy and no members, until the mayor issued the city’s March 23 stay home order. Services have been held on Zoom since then, because it’s important “that we’re modeling the most careful kind of behavior we can,” Nathan said. In a way, that has provided members with a more intimate setting than watching services held in an empty sanctuary. “At the end of every service, we make sure to say, ‘We miss you,’ but we’re together,” she said.

Texas is far from the only state to deem religious services essential — more than a dozen others have done so, according to the National Governors Association. That includes states like New York and Kansas that are led by Democratic governors. But those states still appear to be cracking down on churches that have services with zero social distancing guidelines, at least at the local level.

In states such as Florida and neighboring Louisiana, pastors have been arrested by local authorities after holding services with large groups of people.

Matt Woodfill, the younger brother of Jared, is one of the pastors that petitioned against Montgomery County Judge Mark Keough’s stay-at-home order, similar to Harris County’s.

Woodfill’s congregation, The Way Church, defied the county’s order last Sunday, when it held regular services, though he said they tried to spread people apart. Attendance was still down significantly, from a high of 200 to no more than 50 parishioners this past Sunday.

The church plans to hold drive-in services in their parking lot for Palm Sunday this weekend. He will stand on an outdoor stage, set up with a PA system and a band, while people can listen in their vehicles. This is a high season for churches, with Easter in another week, so Woodfill wants families to feel safe enough to attend services.

Oakwood Church in New Braunfels, a growing community along Interstate 35 between San Antonio and Austin, moved all services online for its 6,000 congregants two weeks ago, in response to orders from the city, according to Pastor Ray Still.

Coronavirus has already affected his congregation directly: parishioner T.J. Mendez died March 26 from COVID-19 at the age of 44. Mendez’s family was very active in the church; one of his daughters was an Oakwood staff member.

On Tuesday, Still drove to the Mendez home, where the rest of the family remains in quarantine. He stood outside his car and prayed with them.

April 6, 2020: This story originally misstated the Massachusetts governor's political party. He is a Republican, not a Democrat.

Correction, April 6, 2020: This story originally misstated the Massachusetts governor's political party. He is a Republican, not a Democrat.