Update, October 2, 2018: This story has been updated throughout.

Dr. Craig B. Thompson, the chief executive of Memorial Sloan Kettering Cancer Center, said Tuesday that he would resign his seats on the boards of drugmaker Merck and another public company, the latest fallout from a widening institutional reckoning over relationships between cancer center leaders and for-profit health care companies.

Thompson has served on the board of Merck, the maker of the blockbuster cancer drug Keytruda, since 2008. He has been on the board of Charles River Laboratories, a publicly traded company that assists research in early drug development, since 2013.

The compensation for the two corporate boards is in addition to what he is paid as chief executive at Memorial Sloan Kettering, the nonprofit institution that is one of the nation’s leading cancer center. In 2016, he received $6.7 million in total compensation from the hospital and related organizations, according to the most recent Internal Revenue Service filings.

The resignations are effective immediately. A spokesman for the hospital said the compensation he received from both companies this year would be deferred until he is 72.

“I believe this is the right decision for Memorial Sloan Kettering and will allow me to redouble my focus on MSK priorities: quality patient care, faculty, scientists and staff,” Thompson said in a memo sent to the hospital staff. He has been the chief executive of the hospital since 2010.

The move followed two tense meetings at the hospital on Monday, spurred by articles by The New York Times and ProPublica, about insider deals among hospital officials and undisclosed industry relationships.

At one meeting with hospital staff, Thompson apologized for his handling of staff reaction to the issues outlined in the articles, and acknowledged that he had not adequately reined in the industry relationships of the hospital’s former chief medical officer, Dr. José Baselga, who has since resigned.

At another meeting, reserved for medical staff members, some doctors said they were interested in calling a no-confidence vote in the hospital’s top leaders, and asked what steps they needed to take to do that, according to several participants in the meeting.

In an interview Tuesday, Dr. Nadeem R. Abu-Rustum, the president of the medical staff, said a small number of doctors had wanted a no-confidence vote in the hospital’s leadership, but were now satisfied by Thompson’s decision.

“These same colleagues are not interested in moving forward with a vote of no confidence,” Abu-Rustum said. “The steps that have been made and taken since the meeting by our leadership have addressed the most important concerns to the medical staff and the associate medical staff and really represents a real progress.”

In addition to resigning his board positions, Thompson also said Tuesday that the hospital would give physicians a greater voice in its operations and would conduct an analysis to understand what had gone wrong at the hospital in recent weeks “so that we ensure our path forward is expertly guided by what we learn.” 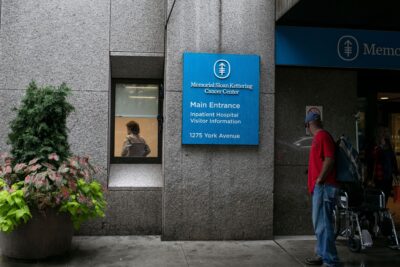 Over the past month, articles in The Times and ProPublica have outlined leaders’ ties to for-profit companies, including an exclusive deal the hospital made with an artificial intelligence startup to license images of 25 million tissue slides. The company was founded by Memorial Sloan Kettering insiders, including a member of the executive board, the chair of the pathology department and the head of a research lab. After members of the pathology lab objected to the deal, the head of the department announced he would divest his stake. Another article detailed how a hospital vice president held a nearly $1.4 million stake in a newly public company as compensation for representing Memorial Sloan Kettering on its board. The hospital said last week that a new policy would prohibit compensation in such situations and that the vice president would turn over his stake to the hospital.

Thompson’s decision to leave those boards does not affect the eight other Memorial Sloan Kettering officials who serve on the boards of outside companies. A task force that was created in the wake of the crisis over conflicts of interest is considering a policy that would prohibit executives from holding such roles, hospital leaders have said.

Thompson also holds an equity stake in Agios Pharmaceuticals, a cancer startup he founded based on research he conducted at the University of Pennsylvania before joining Memorial Sloan Kettering. Thompson settled lawsuits several years ago that were filed by Penn and an affiliated research center, which contended that he hid research to start Agios and did not share the earnings with Penn or the research institute. Thompson disputed the allegations.

Thompson’s seat on the Merck board was brought up at Monday’s staff meeting. Douglas A. Warner III, chairman of the hospital’s board of directors, said that when Thompson arrived at Memorial Sloan Kettering, the hospital board viewed his position at Merck as a “good thing.”

On Monday, Warner said, “we need to step back from that now and ask ourselves whether that continues to be appropriate, whether it’s appropriate in the future.”

Merck said in a statement that “Dr. Thompson’s expertise, perspective and dedication to patient care have contributed greatly to Merck’s mission. His contributions demonstrate why it is so important to have leaders from the medical community represented on the board.” A spokeswoman for Charles River referred questions to Memorial Sloan Kettering.