Now, recent Internal Revenue Service filings show the nonprofit hospital paid more than $1.5 million in severance to Baselga in 2018 and 2019.

The revelations about the former executive led to significant changes governing Memorial Sloan Kettering’s ties to the health care and pharmaceutical industries and prompted an overhaul of its conflict-of-interest policies. The disclosure failures, which were uncovered by The New York Times and ProPublica, also led to a broader reexamination of how medical journals enforce their conflict-of-interest policies as well as heightened scrutiny of the relationships between medical researchers and for-profit companies at cancer centers around the country.

The hospital would not say whether it paid additional severance to Baselga in 2020. A spokeswoman said the past payments reflected the hospital’s “contractual obligation” to Baselga under his employment agreement.

Baselga now is an executive at the pharmaceutical company AstraZeneca, where he oversees development of its cancer drugs. He declined to comment through a company spokeswoman.

Nonprofit institutions, like many of their for-profit counterparts, often enter into employment contracts with top officials that provide compensation upon their departure. And it’s difficult to break those agreements except in situations like court determinations of illegality, said Marcus S. Owens, who ran the IRS division that oversees nonprofits during the administrations of Presidents George H. W. Bush and Bill Clinton.

That said, nonprofits, by law, must disclose the nature of their severance agreements for key officials in their IRS filings. The large payment to Baselga was striking given how significantly his departure rattled the institution.

In the fall of 2018, Memorial Sloan Kettering’s chief executive, Dr. Craig B. Thompson, apologized to his staff for the handling of the episode, saying, “the events of the last few weeks have not been handled as well as I would have liked.”

At the same time, the then-chairman of the board, Douglas A. Warner III, disparaged Baselga, who also held the title of physician in chief, saying he “crossed lines” and “went off the reservation” in his dealings with for-profit companies.

Even though Baselga officially resigned from his position, Warner suggested that the departure was not voluntary, saying that despite Baselga’s talents, he “left us no choice.”

Baselga was a prominent researcher and a prolific author of medical articles. In his resignation letter, he acknowledged his lapses and said the controversy had proved to be “too much of a distraction.”

Baselga also stepped down from the boards of the drugmaker Bristol-Myers Squibb and Varian Medical Systems, a radiation equipment manufacturer, as well as the cancer journal where he had been an editor. 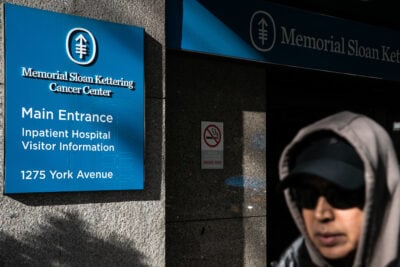 After months of review, Memorial Sloan Kettering overhauled its conflict-of-interest policy, barring its top executives from serving on corporate boards of drug and health care companies and placing limits on how executives and top researchers could profit from work developed at the institution.

Like other major hospitals, Memorial Sloan Kettering’s finances have taken a hit during the coronavirus pandemic. For the first three quarters of 2020, the hospital reported an operating loss of $453 million compared with an operating profit of nearly $77 million in the first nine months of 2019. The hospital saw a decline in surgical procedures and clinic visits, as well as clinical trials and other research. The hospital did receive $100 million in relief funds as part of the Coronavirus Aid, Relief and Economic Security (CARES) Act.

Baselga wasn’t the only former official to receive severance from Memorial Sloan Kettering in 2019. It also paid more than $250,000 in severance to Avice Meehan, the hospital’s former chief communications officer, according to its IRS filing. Meehan declined to comment.

Laurie Styron, the executive director of CharityWatch, an independent watchdog group, said that hospitals often compensate their staff generously because they must attract highly trained and educated doctors who would be well-paid elsewhere. Still, she said, the multimillion-dollar sums can surprise donors, who typically give money to support research or patient care.

“The reactions we get from donors are negative when they hear that they, as a middle-class working person, sent in what they could toward a charitable cause and then they find out that someone is making millions of dollars,” she said.