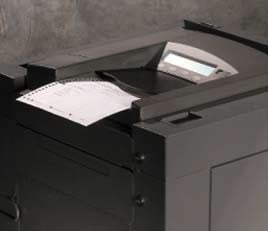 A county clerk in Michigan has warned that electronic voting machines used across the country have failed to correctly tabulate votes.

Johnson, a Republican running for reelection, wrote that four communities reported problems during testing of the M-100 (PDF) voting machine tabulators made by Election Systems & Software. "The same ballots, run through the same machines, yielded different results each time," she wrote.

The manufacturer attributed the problem to dust and debris build-up on the sensors inside the machines, Johnson wrote. But that left her with questions about their use on Election Day.

"Conflicting vote totals have reportedly surfaced in other areas of Michigan," Johnson wrote. "This begs the question—on Election Day, will the record number of ballots going through the remaining tabulators leave even more build-up on the sensors, affecting machines that tested just fine initially? Could this additional build-up on voting tabulators that have not had any preventative maintenance skew vote totals?

"My understanding is that the problem could occur and election workers would have no inkling that ballots are being misread."

A spokesman for Election Systems & Software did not immediately return a call from us for comment.

To date, Johnson has received no response from the commission, she said in a statement Tuesday afternoon. "As soon as I became aware of local clerks’ concerns, I immediately notified the appropriate election officials regarding those concerns. To date, we have not received a response from those offices. We do have a plan of action that in the event of a recount in close races, ballots will be recounted by hand."

We contacted the commission ourselves. The federal commission has no jurisdiction over the management of Michigan’s voting systems, spokesman Bryan Whitener said in an e-mail. "Participation by the states in the federal program is voluntary," he wrote, noting that the commission included the letter in its voting system reports clearinghouse online so the public and election officials could see it.

The commission also suggested we contact Michigan officials "regarding their logic and accuracy testing for this equipment."  We have a call in to the secretary of state’s office and are awaiting word back.

In her letter, Johnson said that if local clerks perform any maintenance or cleaning of election machines, it would void the devices’ warranty. And the manufacturer has not performed any maintenance because the machines were delivered three years ago, she wrote.

"To ensure accuracy, I am requesting a federal directive or law that would allow county clerks, under the supervision of their bipartisan canvass board, to conduct random audits to test machine accuracy using voting tabulators that have had preventative maintenance within the last year," Johnson wrote.

Johnson ended the letter by writing, "I believe this matter, which is not a partisan issue, but an issue of integrity, needs your immediate attention and I would urge you to investigate as so much is at stake."

For more stories from around the Web on voting issues, see our VoteWatch . We’re updating it all day.