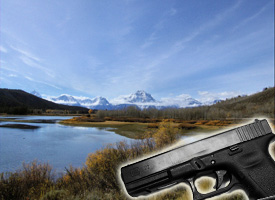 The Department of the Interior announced today the finalization of a rule that will allow visitors to national parks and wildlife refuges carry loaded and concealed weapons. The rule replaces a Reagan administration policy that first allowed guns in parks but required them to be safely stowed and unloaded.

Standard gun laws apply -- anyone carrying a loaded and concealed weapon in the park must have a permit to do so -- and the rule will reflect state gun laws, not supersede them.

The National Rifle Association, who lobbied for the rule's approval, lauded the DOI for changing the law.

"We are pleased that the Interior Department recognizes the right of law-abiding citizens to protect themselves and their families while enjoying America's National Parks and wildlife refuges," Chris W. Cox, executive director of the NRA-Institute for Legislative Action, stated in a press release.

The rule also had the support of half the Senate. Nine Democrats and 41 Republicans sent letters to the agency encouraging it to change the law.

Some proponents of the rule have said being able to carry a loaded weapon will better allow them to defend themselves against wild animals when hiking.

But the rule has been a source of consternation for former and current National Park Service officials, as well as park conservation groups and park visitors.

"Once again, political leaders in the Bush Administration have ignored the preferences of the American public by succumbing to political pressure, in this case generated by the National Rifle Association. This regulation will put visitors, employees and precious resources of the National Park System at risk," Bill Wade, president of the Coalition of National Park Service Retirees, said in a joint press release of four park conservation groups.

Their concerns range from the rule hampering their ability to effectively combat poaching to endangering the roughly 300 million park visitors each year.

To read more about this rule or the other rules ProPublica is covering, visit our Midnight Regulations chart.