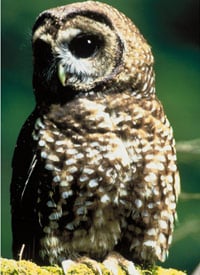 With just 39 days left in office, the Bush administration has just issued a final rule change on the Endangered Species Act, removing a provision that requires Fish and Wildlife Service scientists to make sure that endangered species won't be harmed by federally approved logging, mining and road-building projects.

Now those reviews will be conducted by other federal agencies, like the Army Corps of Engineers or the Federal Highway Administration. Environmentalists and congressional Democrats say these agencies may want to ensure that a project moves forward despite concerns about endangered species, and therefore can't be trusted as independent overseers.

"It's a classic example of letting the fox guard the henhouse. It would allow thousands of projects that harm endangered species to move forward without mitigation," said Noah Greenwald, biodiversity program director for the Centers for Biological Diversity, an environmental non-profit opposed to the rule.

Business interests support the changes, saying that it will remove an onerous policy that has blocked important projects.

"The Chamber welcomes the Secretary's common sense approach to the ESA, which will ensure that many infrastructure projects move forward," announced the U.S. Chamber of Commerce in a media release.

In a separate announcement, the Fish and Wildlife Service said that it will prevent the effect of greenhouse gases on threatened wildlife from being factored into the Endangered Species Act.

Environmentalists have argued that global warming's impact on the habitat of the endangered polar bear should be considered in the construction of new power plants.

Dirk Kempthorne, secretary of the Department of the Interior, has argued that the Endangered Species Act was never meant to be applied toward the regulation of greenhouse gases.

When asked at a news conference about the rushed process, Kempthorne compared his agency to the New York Giants playing in the final minutes of a football game:

Questioned about the last-minute nature of the rule change, which put Fish and Wildlife officials on a forced march to sort through more than 200,000 comments about the proposal, he asked, rhetorically, if Eli Manning, the New York Giants quarterback, should be taken off the field in the last five minutes of a game.

"We have 39 days of work left," the secretary said, "and we owe it to the public to keep working."

The change to the Endangered Species Act, which will be difficult for Obama to reverse, is one of many midnight regulations we've been tracking.