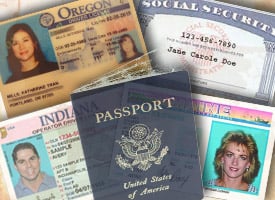 You may be sated on turkey, holiday cookies and eggnog, but we have another holiday treat for you: more pesky final rules from the Bush administration. ProPublica continues to track the midnight regulations and will do so through the final hours. There is less than a month left -- with some exceptions, rules finalized now will not go into effect until after President-elect Barack Obama is sworn into office. Nevertheless the rules continue to trickle in.

To help distract you from your holiday hangover, we bring you six rules today. Our first rule comes from the Department of Homeland Security. On Dec. 17, the agency issued an interim final rule that eliminates expired forms of identification from the list of acceptable employment verification documents.

The department did not publish this rule in draft form for public review or comment, but is accepting public comments now before it promulgates a final rule. It justified its move by pointing to a 1998 notice of proposed rulemaking that also prohibited expired documentation; that rule was never implemented. The public had an opportunity to comment back then -- a decade ago -- and the department says those comments were considered when writing this rule.

ProPublica is looking into how common it is to skip the public comment and review step in the early stages of the rulemaking process.

On Dec. 9, the Department of Energy published a rule proposal that would eliminate the "public interest" balancing test when determining whether to release an otherwise exempted document under the Freedom of Information Act. It would also require people to pay more for FOIA'd documents. Paper copies, now at 5 cents a page, will increase to 20 cents per page.

Another rule is for the use of snowmobiles in Yellowstone National Park. A Clinton-era midnight regulation banned their use entirely but never saw the light of day. The current administration delayed implementation, and then a federal court vacated the rule. The Bush alternatives have faced a similar fate of legal wrangling. But undaunted, the Interior Department is trying one last time. They proposed a new snowmobile rule on Nov. 5.

We also take a look at a finalized rule from the Treasury Department that seeks to clamp down on illicit online gambling, and at a directive from the Department of Agriculture that regulates the management of bighorn sheep to ensure they are kept separate from domestic sheep. The latter rule has placed state authorities at odds with federal officials. In what has been called an under-the-radar move by the USDA, state wildlife managers believe the meddling by the federal government will only further endanger the health of an already fragile bighorn sheep population.

One last note: The National Oceanic and Atmospheric Administration has withdrawn its proposed changes to the environmental review procedure for fisheries. Critics charged the rule would have complicated the review process and given too much power to the fishing industry when determining environmental impact. According to Monica Allen, a spokesperson for NOAA, the agency realized it would not be able to complete work on the rule within the next few weeks and so they withdrew the proposed rule from consideration by the Office of Management and Budget. "OMB wants to have a clean slate for the next administration," Allen wrote us in an e-mail.

As always, we welcome your suggestions of rules we may have missed. Have a happy and safe New Year!