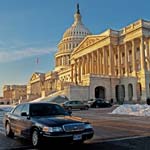 According to today’s Wall Street Journal, the military has dispatched officials to accompany lawmakers on dozens of trips abroad – and shower them with "thousands of dollars worth of alcohol, food and other amenities." In doing so, the Journal reports, the "military exploits its official escort role on these trips to foster relationships with lawmakers who approve departmental budgets and top appointments. The disclosures also underscore the military's pervasive pursuit of congressional access."

The officials who go on the trips are usually the same ones lobbying Congress in Washington, reports the Journal, which requested the military-expense records through the Freedom of Information Act.

The military laid out its strategy very clearly in correspondence between Army officials in November 2008 about an official’s upcoming trip to Europe with Sen. Chris Dodd, D-Conn. Its goals were to:

"1. Establish a personal connection between the Army and Senator Dodd office. 2. Create Member access through relationships. 3. Educate members of Congress on FCS," a reference to the Future Combat Systems, a multibillion-dollar modernization program favored by the Army that was killed this year by the Pentagon.

The official was given $7,000 to cover expenses. The records for this trip presumably don’t include a breakdown of those expenses; just 43 of the more than 100 congressional trips handled by the Air Force and the Army from December 2007 to mid-2009 do.

The Army said in a statement that helping lawmakers with overseas travel was "a way to provide information about the Army to assist members of Congress and congressional staff in making fully informed decisions about Army policies, programs and budget." A spokesman for Dodd declined to comment.

The Journal is quick to point out that the travel records don’t include any evidence of a quid pro quo or any favoritism.