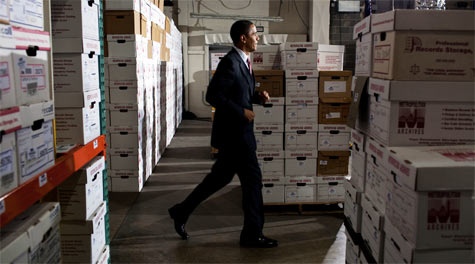 It’s been five days and counting since the Recovery Accountability and Transparency Board released its report on stimulus jobs, and the complaints, which we’ve detailed before, are mounting. According to the report, 640,000 jobs have been created or saved by the stimulus. But how accurate is that number?

The Wall Street Journal reports that that number may be inflated by at least 20,000 jobs. Based on a review of reports, reporters Louise Radnofsky and Maurice Tamman write that recipients of stimulus grants and contracts appear to have been confused by the forms required for reporting expenditures. Ed DeSeve, President Barack Obama’s senior adviser on implementation of the stimulus plan, said the administration is "looking at both overcount reports and undercount reports, and continue to ask questions of the recipients to try to fix errors." In the end, DeSeve told the Journal, "We think any adjustments to the direct jobs count will be modest as a percentage of the 640,000 jobs total, either raising it or lowering it slightly."

One of the reporting problems, says the Associated Press, is that salary increases were sometimes counted as "jobs saved." The AP reviewed data for 14,506 "jobs saved" under the federal Administration for Children and Families, which is part of Health and Human Services. About two-thirds of them weren’t saved at all – 9,300 were existing employees who received pay raises and benefits. (We’ve reported on other job counting glitches here.)

A review of reports by the advocacy group Good Jobs First backs up the administration’s claim that some stimulus jobs were also undercounted. Some 28,000 grant recipients and 3,000 contract recipients reported a zero in a column for jobs created or saved, they found. And among those, 2,464 projects – totaling $1.1 billion in stimulus payments – have completed a substantial amount of work. While there may be other explanations for a lack of jobs created or saved, it could also be that whoever filled out the reports left the column blank out of confusion.

Correction, Nov. 4, 2009: This post originally said that the White House had released a report on stimulus jobs. In fact, the report was released by the Recovery Accountability and Transparency Board, which is an independent government board created by stimulus package. The chairman, Earl Devaney, was appointed by the president.