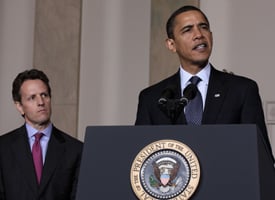 When President Obama unveiled his plan this week to limit the pay of executives at companies taking taxpayer money, we noted that his restrictions weren't, well, all that restrictive.

While the new rules are stricter than the Bush administration's, they still leave plenty of wiggle room for execs to make out just fine.

The plan includes a $500,000 limit on annual compensation and disclosure of luxurious perks for senior executives of companies that receive bailout funds. But we pointed out that additional compensation could still be paid in restricted stock awards or other "long-term" performance incentives.

And while the rules also require a vote by shareholders on the top execs' pay packages, the vote would be non-binding.

Now, this morning's Wall Street Journal packs a new list of potential loopholes in Obama's plan, as well as some unintended consequences.

The Journal, in consulting executive-pay consultants and management attorneys, reported:

Some said the plan doesn't limit total compensation, because it allows companies to boost awards of restricted stock.

"I am fearful that companies will look at this as an opportunity to grant more restricted shares and stock options to executives who already have an abundant amount of equity," said Jesse Brill, a securities and compensation lawyer who is chairman of CompensationStandards.com, an advisory Web site.

And then there are those pesky loopholes. From the Journal:

Others said the preliminary restrictions released by the Treasury Department are overly vague. For example, the $500,000 annual pay limit applies only to "senior executives." James F. Reda, a New York compensation consultant, said companies could give certain executives lower titles or assign them to head subsidiaries.

There also isn't a clear definition of what constitutes a luxury perk. Companies could grant executives benefits such as medical exams, tax gross-ups and personal tax advice, said Sarah Anderson, an executive-pay analyst at the Institute for Policy Studies, a liberal think tank in Washington.

The plan also doesn't address other important aspects of executive pay, such as deferred compensation and pension benefits, the Journal reports.

But don't worry yet; this apparently isn't Obama's final plan. The Treasury has said it plans to issue more detailed regulations soon. So stay tuned.