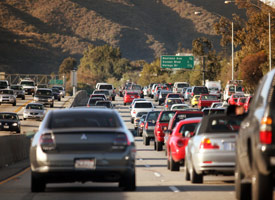 ProPublica is kicking off the week with three more rules for our growing Midnight Regulations chart.

One rule sets new standards for the auto industry and its production of more fuel-efficient cars and small trucks. Automakers, some of whom spent the weekend pleading with Congress for a new bailout, have said it will be too costly to meet the new rules, which require cars by 2015 to get nearly 36 miles per gallon. Environmentalists and consumer groups also take issue with the rule, but for different reasons. They claim the National Highway Traffic Safety Administration calculated its new standards by using unrealistic gas prices. By adjusting the gas prices upwards, they say, NHTSA could have justified more miles per gallon on a faster timeline.

Our second rule also falls under the never-ending debate on energy sources. The Environmental Protection Agency is proposing to expand the list of industrial waste exempted from hazardous waste management requirements. The goal is to allow more of the waste to be converted into fuel. To qualify, emissions from the waste must be comparable to those of burning fuel oil. Opponents to the rule have warned about the impact to air quality and the poor track record of the facilities selected to manage the waste.

Colorado is the focus of the third rule we added today. At stake is protection for some 4.4 million acres of roadless wilderness areas. Under the proposal, exemptions would be made for roughly 300,000 acres to build temporary roads for wildfire prevention, to expand existing coal mines and for some utility infrastructure, among other reasons. About 10,000 acres would be set aside for skiing. Environmentalists fear the language of the rule is too weak and could open the door for gas drilling.

Thanks again to all of our readers for your suggestions. Please keep them coming, and stay tuned for more posts this week!