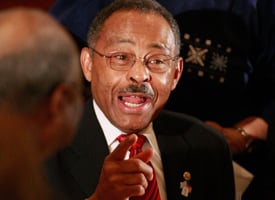 Roland Burris was so anxious to become a U.S. senator that he expressed his desire to fill Barack Obama's seat to "anyone who would listen," he claimed recently.

Turns out, many were listening -- even more than Burris has previously acknowledged in public statements, affidavits and sworn testimony.

Today's Chicago Tribunerevealed yet another omission in Burris' evolving (and often contradictory) accounts of how former Illinois Gov. Rod Blagojevich came to appoint Burris to the Senate.

Burris twice spoke to a top official in Blagojevich's administration, including one conversation after Blagojevich was arrested on Dec. 9 for federal corruption charges, the Tribune reported.

Burris has failed to acknowledge to lawmakers or the public any contact he had with this official, John Filan, the state's chief operating officer under Blagojevich.

In the second conversation, Burris asked Filan to put in a good word with then-Lt. Gov. Pat Quinn, who eventually replaced Blagojevich as governor, the Tribune reported. Filan, who's a longtime friend of Quinn, told the Tribune that he never made the call.

The conversations with Filan are not Burris' first omission.

After being appointed to the Senate, Burris first claimed he'd had no contact with Blagojevich or his allies before being offered the seat in late December. Burris later admitted, in testimony before an Illinois House panel, to sharing his interest in the Senate post with Blagojevich's former chief of staff.

But in a Feb. 4 affidavit Burris filed with the House panel, he admitted to contacts he had with five other Blagojevich insiders, including the former governor's brother, who asked Burris to help fundraise for Blagojevich.

Burris, meanwhile, also reached out to Filan, who recounted these encounters in an interview with the Tribune.

The first conversation took place in the fall when Burris called to give Filan a "heads-up" that he was going to announce his interest in the Senate job.

"I think he [Burris] basically said, 'If it were to come to pass that Pat Quinn would become the governor, would you put a good word in for me?'" Filan told the Tribune. "I didn't do that, however."

The Tribune's story comes on the heels of a Chicago Sun-Timesreport that Burris had more contacts with Blagojevich's chief of staff than he'd disclosed. In total, Burris had four conversations with John Harris, who now is Blagojevich's co-defendant in a criminal case, the Sun-Times reported. But in the Feb. 4 affidavit, Burris acknowledged only one conversation with Harris.

How is Burris responding to these new revelations? He isn't.

His new public relations strategy is simple: don't communicate with the public, at least not through the media.

"What I will no longer do after today, now that there's an ongoing investigation, is engage the media and have facts drip out in selective sound bites," Burris said in a speech at the City Club of Chicago earlier this week.

The investigation he's referring to is actually just one of two investigations: The U.S. Senate Ethics Committee launched a preliminary ethics inquiry into Burris this week after a local state's attorney opened a perjury investigation.

At the Chicago Club speech, Burris said his inconsistent statements are as easy to explain as "one, two, three."

Since then, however, he has stonewalled reporters, spending his time holed up in private meetings. Burris cancelled his public events Thursday, interrupting his previously scheduled "listening tour" of Illinois to return to Chicago to plot strategy, the Washington Postreported.