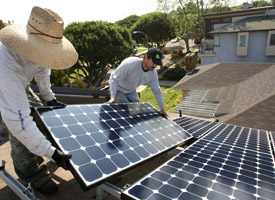 The South Carolina Supreme Court said it could rule by Friday on whether Gov. Mark Sanford can reject education funding from the stimulus. Sanford says he doesn't want the money if he can't use it to pay off debt, but the justices don't appear to be leaning in his favor, The State reports.

Debate over the weatherization plan heats up again. Last month, ProPublica documented how stimulus funds favor people living in cold regions. Now, the AP reports that "the weatherization program could be one of the most difficult-to-track portions of the $787 billion recovery act." (The chairman of North Carolina's House Select Committee on Economic Recovery has warned citizens that they'll need to monitor the program themselves.)

The Department of Housing and Urban Development lowered the bar for housing authorities competing for stimulus funding, reports the AP. Previously, only "high performers" were considered eligible.