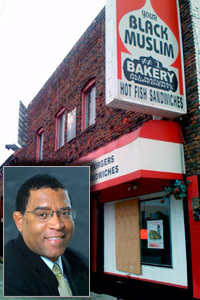 It seems that much -- but not all -- of the mystery surrounding the August 2007 murder of Oakland, Calif., journalist Chauncey Bailey has evaporated.

A five-hour taped statement made to prosecutors by Devaughndre Broussard, who is accused of killing Bailey, laid out the plot to assassinate the 57-year-old Oakland Post editor in grisly detail. The statement was disclosed by reporters last week.

In the statement, Broussard, 21, said he and another man, Antoine Mackey, were told to kill Bailey by Yusuf Bey IV, the former leader of Your Black Muslim Bakery, a now-defunct business that sold baked goods and espoused Nation of Islam-style religious principles.

Broussard said he and Mackey stalked Bailey as he walked to his office in downtown Oakland. Then Broussard killed Bailey with three blasts from a sawed-off shotgun that Bey had given him, he said.

According to Broussard, Bey ordered the hit because Bailey was reporting on the bakery's financial ills. Bailey, who reported for the Detroit News and the Oakland Tribune before becoming the editor of the Post, was "killed because he was about to write an article," Broussard said in his statement.

Broussard's words mark a major turning point in the case: They are the strongest evidence to emerge so far that the slaying was the product of a conspiracy to silence Bailey.

Broussard is now testifying before a criminal grand jury, a process that's expected to lead to indictments against Bey and Mackey. His statement was first obtained by the Chauncey Bailey Project, a collaborative effort by print, Web, TV and radio reporters, as well as student journalists. (Full disclosure: this reporter was a founding member of the project, but did not work on the recent stories.)

Bey and Mackey have repeatedly denied any role in Bailey's murder.

While police detectives quickly zeroed in on Broussard and charged him with Bailey's murder, the reporters who've been covering the crime over the past 20 months discovered an array of clues pointing to the involvement of Bey and Mackey -- and the failure of the Oakland Police Department to follow up on those leads.

The department's well-publicized failings have spurred the resignation of its chief, a probe by Federal Bureau of Investigation, and, on April 13, the suspension of the lead detective on the Bailey case.

Roberson's murder, Broussard said, was motivated by a kind of twisted revenge. In 2005, Roberson's nephew killed Bey's brother during a carjacking at an Oakland gas station. However, there's never been any evidence to suggest that Roberson, who was homeless, played a role in the carjacking-murder.

Broussard said Mackey killed Wills, a chef who lived near the bakery, because he was white. According to the statement, Bey described Wills as a "devil."

We were unable to contact Mackey, who is serving time in a California state prison on a burglary conviction. Bey's attorney, Anne Beles, who is representing him in an unrelated kidnapping case, told us: "I will not comment on the testimony of Broussard in the grand jury proceedings. We will not try our case in the media. We respect the press, but it is not the venue in which we choose to argue." She said her client intends to "vigorously" fight any new charges he may face.

For all the information packed into Broussard's statement, many questions linger about Your Black Muslim Bakery, which operated in Oakland for more than 30 years. The Bailey project has linked the group to the unsolved slayings of five other people: Birdie Mae Scott and Wendell Scott (1968), Ronald Allen (1982), Peter Kaufman (1986) and Waajid Bey (2004). Nobody has been charged in any of those cases.

The Scotts, a married couple, were members of a Nation of Islam mosque run by Bey's father and uncle. Shortly after criticizing Bey's father, the couple were shot to death with a hunting rifle while lying in bed. Evidence suggests that the other three victims, all employees of the bakery, were murdered because of power struggles within the organization.