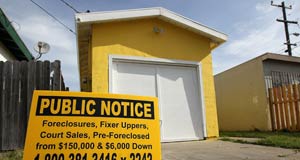 We reported in February that a jump in disqualifications was expected. That rise is now upon us. Homeowners can be dropped from the program if they can't keep up with their reduced payments, they don't provide  needed documents, or the servicers determine that they are ineligible.

Some 367,000 homeowners remain in limbo, stuck in trial periods that have lasted longer than they are supposed to. One silver lining: the current number of permanent modifications, 228,000, is still greater than the number of homeowners who’ve been dropped from the program, 158,000.

You can see our interactive breakdown of the data here. It shows the cancellations at each servicer, as well as which servicers (the biggest banks) are primarily responsible for the continued logjam.

As we’ve reported, delays and confusion on the part of servicers have been a reality for homeowners since the program started a year ago. Treasury has promised to crack down on servicers like JPMorgan Chase that strand homeowners in trials, but the backlog continues. As of last July, Chase had begun 79,000 trials. By the end of March, it had reported final resolutions for only 57,000 (31,000 permanent modifications, the rest canceled). That means 22,000 homeowners still hadn’t gotten an answer after eight months.

According to a report issued Wednesday by the Congressional Oversight Panel, reliable information on the reasons for cancellations won’t be available any time soon. Treasury only started collecting such information in February, and the panel said that servicers had provided reasons for less than a third of the denials.

A jump in cancellations had been expected for a number of reasons. It was always expected that a large portion of homeowners would be dropped, either because they couldn’t make the payments or because of disqualification. Treasury officials expect a failure rate between 33 and 50 percent. The servicers have been slow to report cancellations, both because of the backlog (they’ve been slow at everything) and because the Treasury Department has required them to review a number of denials before making them final.

Note: Starting this month, we’ve changed the way we’re estimating the number of homeowners in limbo. In the past, we termed any trial that was over three months as in limbo, because that’s how long the trial is supposed to last. Our new method is more conservative, allowing for an extra one month lag in reporting the final resolution: So "limbo" is now over four months, not three. We think this gives a clearer picture of which servicers have been slow to provide final answers to homeowners.

See our interactive breakdown of the data here.