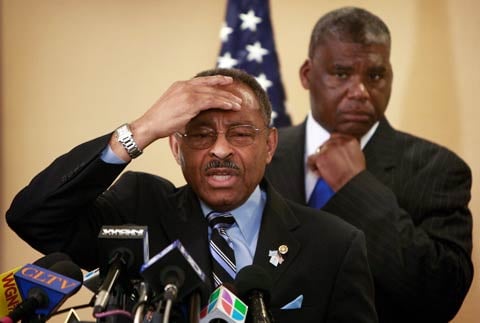 Sen. Roland Burris (D-IL) has earned his very own spot on Scandal Watch after a steady stream of details emerged in past weeks revealing that heâd had more contacts with allies of former Illinois Gov. Rod Blagojevich than heâd previously let on.

Burris had a controversial induction into the U.S. Senate thanks to his appointment by the scandal-plagued Blagojevich, who is accused of conspiring to sell President Obama's vacant Senate seat for personal benefits. But Burris managed to stir up a controversy all his own with conflicting accounts of how exactly he ended up with the seat.

At first, in a Jan. 5 affidavit, Burris claimed heâd had no contact (PDF) with Blagojevich or his allies before being offered the seat in late December.

When he testified before an Illinois House panel on Jan. 8, a lawmaker asked him if he had talked to any Blagojevich staffers or anyone closely related to the governor, mentioning six names in particular. Burris admitted talking to one of them, Blagojevichâs former chief of staff Lon Monk, but made no mention of the others.

Later, in a Feb. 4 affidavit (PDF), he admitted that heâd actually spoken to five of the people named by the lawmaker, including the governorâs brother, Rob Blagojevich. He also claimed in that affidavit that heâd rejected a fundraising request from Rob Blagojevich, but on Feb. 16, Burris changed his story yet again: He told reporters that he had attempted, unsuccessfully, to raise campaign funds for Blagojevich while actively seeking appointment to the Senate.

Burris defended himself at the City Club of Chicago on Feb. 18, saying, "I have done nothing wrong, and I have absolutely nothing to hide." He blames state lawmakers for not uncovering the full story at the Jan. 8 meeting, but the transcript shows he was asked very specific questions about both his ties to Blagojevich and some hefty campaign donations from an Illinois businessman. Burris testified that he hadnât discussed the donations since 2002, which, as ProPublica reported, is not true.

Burris is now under investigation by both the U.S. Senate Ethics Committee and a local Illinois prosecutor.