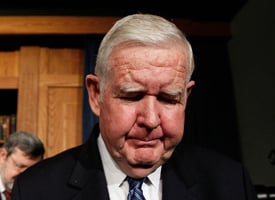 Now that the Feds have raided two firms with ties to Rep. John Murtha (D-PA), we figured it was time he got a scandal of his very own on Scandal Watch.

Last November, the FBI raided the office of PMA Group, a defense-oriented lobbying shop founded by a former Murtha aide. According to the New York Times, the investigation focuses on whether the firm "funneled bogus campaign contributions" to Murtha. Since 2002, PMA Group and its clients have raised a total of about $1.7 million for Murtha. Meanwhile, as chairman of the House Appropriations Subcommittee on Defense, Murtha steered 26 earmarks worth a total of $93.1 million to clients of PMA Group in 2007 and 2008, reports Roll Call.

Kuchera Defense Systems and Kuchera Industries, defense contractors headquartered in Murtha's district, have also benefited from his role as gatekeeper to Pentagon coffers. According to the Washington Post, they "won $50 million in Pentagon contracts from 2001 to 2008, and have long-term contracts that could be worth more than $100 million over a decade." Kuchera employees have donated more than $65,000 to Murtha's campaigns and PACs.

A hodgepodge of federal investigators raided the Kuchera offices and the homes of its execs in late January. According to the Tribune Democrat, that probe is looking into "potential misuse of corporate funds," focusing in part on the LBK Game Ranch, which is owned by CEO Bill Kuchera and was the site of a "high-end fundraiser" for Murtha last fall.

Murtha spokesman Matthew Mazonkey told the Pittsburgh Tribune-Review on Feb. 11, "We have not been contacted by any federal agency, and no one is suggesting that Jack Murtha has anything to do with this. Period."