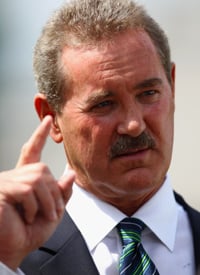 Texas billionaire Robert Allen Stanford -- that's Sir Allen to you -- has earned a spot on our Scandal Watch list after being accused by the SEC on Tuesday of operating a "massive, ongoing fraud." The size of the alleged fraud -- $8 billion -- doesn’t quite reach Madoff-ian proportions, but Stanford's flamboyant lifestyle, Washington ties and recent disappearance should add enough drama for any Scandal Watcher.

According to the SEC complaint (PDF), Antigua-based Stanford International Bank lied to investors about where it was putting their money. Instead of putting it into "safe" CDs as promised, the SEC says the firm invested it in "illiquid investments, such as real estate and private equity." Like Madoff, Stanford promised his investors too-good-to-be-true returns based on his own unique formula. But the SEC called those returns "improbable, if not impossible."

In a bizarre twist, Stanford's bank is also accused of lying to its investors about its exposure to Madoff. The SEC alleges that Stanford executives told investors they "had no direct or indirect exposure" to Madoff's investments when in fact $400,000 was invested in a firm tied to Madoff.

Stanford wrote a letter to his clients on Feb. 11 in response to reports that his company was under investigation. In it, he wrote that the company was "focused on upholding industry guidelines and standards."