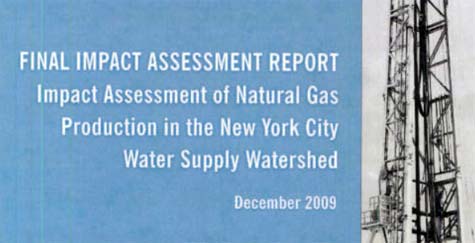 After months of warning signs,  New York City officials have called for a ban on natural gas drilling within the city’s 2,000-square-mile upstate watershed and urged Albany to withdraw its controversial draft environmental review for drilling across the state.

The move follows the completion of a yearlong study by a private consulting firm commissioned by the city, which found that "gas drilling poses unacceptable risks to the unfiltered drinking water supply for nine million New Yorkers." It sets up a confrontation between the city, which says any degradation of its unfiltered water supply could cost upwards of $10 billion to fix, and Gov. David Paterson, who has said the drilling would be an important part of the state’s economic recovery.

The city announced its position following the release of a consultant’s report, commissioned by city’s Department of Environmental Protection, which found that the chemicals injected into the ground as part of the drilling process known as hydraulic fracturing could make their way to groundwater and contaminate water reservoirs. It cautioned that the wastewater produced from the process posed a similar risk.

Gas development, the report said, could mean 6,000 wells drilled in the watershed and brings a "risk of exposing watershed residents and potentially NYC residents to chronic low levels of toxic chemicals."

The report also found that the fracturing process, which happens under very high pressure, could spread subsurface contamination and alter the natural flow of deep groundwater. It raised concerns that the disruption from the process could damage the tunnels that bring drinking water to the five boroughs.

The city’s investigation as well as a statewide environmental review follow a lengthy investigation by ProPublica, which found that state environment officials may not be prepared to handle the effects of the drilling, and raised early questions about how drilling development could impact New York City’s water supply.

Mayor Michael Bloomberg had declined to take a firm stance on the issue until the report was completed, but has now submitted the city’s comments to the state Department of Environmental Conservation in time to meet Albany’s Dec. 31 deadline for public review of the drilling plan.

"The mayor very clearly said that if our analysis were to determine that [drilling] should be prohibited – and now it has – we would fight it," said Marc LaVorgna, a spokesman for Bloomberg.  "It’s clear that it’s a risk that cannot be taken and drilling cannot be permitted."

At a press conference held yesterday, Gov. Paterson said that his office was aware of the mayor’s position, and that his comments would be considered during public comment period for the state’s draft environmental review on drilling released in September. The public comment period was extended from November to the end of December in response to uproar from environmentalists, politicians and concerned residents, and to allow New York City the time to complete its review.

"This is the time when the public, the mayor and any other advocate can try to persuade us that this decision needs to be reversed," said Paterson.