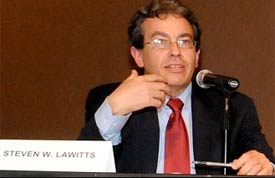 As New York State continues to hash out the environmental ramifications of natural gas drilling in the Marcellus Shale, anticipation is building over what New York City, and its mayor, will have to say about it.  The city gets 90 percent of its drinking water from the Catskill-Delaware watershed, which is smack in middle of the area where drilling could happen.

One of the strongest clues to the administration’s stance came Friday in testimony at City Hall, where acting Department of Environmental Protection Commissioner Steven Lawitts said he hopes the city’s watershed will be afforded the same protections that apply to parts of the Great Lakes region. Gas drilling is forbidden under the beds of Lakes Erie and Ontario.

"This precautionary approach is appropriate for the Catskill-Delaware watersheds," Lawitts told the City Council’s committee on environmental protection and some 200 people who packed the hearing room.

Did that mean Lawitts was calling for a ban on drilling in the watershed?

A spokesman for Mayor Michael Bloomberg cautioned us not to read between the lines.

Lawitts "gave very strong comments because we have deep, deep concern for the potential impacts and we are still reviewing the issue – but we have not called for a ban," the spokesman, Marc LaVorgna, said in an e-mail. "The Great Lakes analogy is apt in that they were able to carve out special considerations."

LaVorgna said the city won’t formalize its position on gas drilling until it gets the final report from a consultant it hired to assess drilling in the watershed, due by the end of the year. The consultant’s preliminary report  contrasted with the state’s own environmental review released late last month and warned that no amount of regulations or protections could protect the city’s water. The city has repeatedly expressed concerns that the state’s review process hasn’t adequately addressed dangers to the watershed.

At the time the consultant’s preliminary findings about drilling were released, Bloomberg told reporters that "if this has the danger of polluting, we will fight it."

In his testimony before the council, Lawitts underscored that commitment.

"We will do whatever we have to do to protect the watershed," he said. "And that includes whatever legal options are available to us."