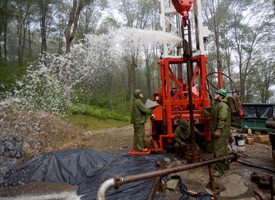 Oil and gas industry representatives have been singing the praises of state environmental regulations in recent weeks as they work to fend off federal legislation to govern the process of hydraulic fracturing. But a sweeping new bill introduced Friday in the New York State Assembly is the kind of thing that may change their tune.

The proposed state legislation, offered by Democrat James Brennan and 11 other representatives, would ban the use of hydraulic fracturing within the New York City watershed and within five miles of its border. It also would require the disclosure of all fluids used in the controversial drilling process, as well as their precise chemical identities in the case of emergency, and would hold the industry accountable for paying broad costs associated with protecting the state's water resources.

The bill is largely symbolic because it is being offered so late in the legislative session. Nonetheless, it is a harbinger of where state regulations in New York may be headed soon.

It follows a year of contentious debate over the fracturing process, in which vast amounts of water and sand laced with chemicals are shot underground under explosive force to break up rock and release gas. The process is not regulated by the Environmental Protection Agency because hydraulic fracturing is exempt from the Safe Drinking Water Act. Its governance varies from state to state.

A series of investigative reports by ProPublica have found numerous cases across the country in which water has been contaminated near sites where fracturing and intensive drilling take place. In New York state last summer, Gov. David Paterson put the brakes on drilling developments in the Marcellus Shale and ordered a robust supplemental environmental review process before permits could be issued.

Now the Brennan bill would supplant the results of that environmental review, due to be completed this summer, and could override the state Department of Environmental Conservation's authority in regulating the industry.

"It may require [the regulations] to be rewritten," said Lorrie Smith, Brennan's legislative director, "but the legislature has the authority to require agencies to do whatever they think is best. We feel that protecting people's drinking water is awfully important."

A DEC spokesman said the agency could not talk about pending legislation, and the governor’s spokesman could not be reached for comment.