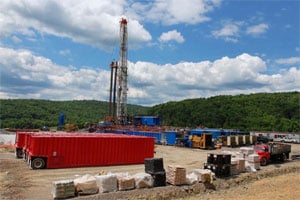 New York State environment officials shoved a cumbersome task off their plates Friday when they announced that their controversial environmental review of natural gas drilling in New York's Marcellus Shale would not apply to drilling inside New York City's 1,900-square-mile watershed.

The decision appears to protect the unfiltered water supply for nine million residents -- as well as another unfiltered watershed near Syracuse, N.Y. -- because energy companies will be required to undergo a separate and exhaustive review for each well they propose to drill and hydraulically fracture inside the area, a hurdle that may amount to a de facto ban.

But it also removes a significant political and scientific obstacle to completing the two-year statewide review process, paving the way for drilling to proceed across much of the rest of the state as soon as next spring.

"Clearly there will be less analysis required to finish the job now that we are going to be focusing on the environmental safety of the process and not getting into the unique components of the FAD watersheds," said New York State Department of Environmental Conservation assistant commissioner Stuart Gruskin, referring to the Filtration Avoidance Determination, the federal permit that allows New York City's water to be delivered untreated. "We are not giving special treatment to those FAD watersheds or deciding that it is unsafe to drill there -- rather we are pulling them out and recognizing that there are a distinct set of issues."

The state has received more than 14,000 comments relating to its generic statewide environmental review and has struggled to complete another draft of that review while coping with questions about the New York City watershed, and a shortage of staff to complete the research. By simplifying the scope of the study, state officials hope they can finish the larger review, known as the SGEIS, by the end of the year. Then they'll begin considering the 58 drilling applications for outside the watersheds that have already been submitted, soon after.

Concerns about the environmental impacts of drilling inside the New York City watershed -- and about the state's preparedness to manage the drilling elsewhere -- were first raised by ProPublica in a July 2008 article that found state officials were not informed about what chemicals would be pumped underground during hydraulic fracturing and did not have a plan to dispose of the hazardous waste the process would produce.

Gruskin said Friday's decision to separately review drilling in the watershed was not an acknowledgement that fracturing presented any special risk, but rather was based on concerns that construction and traffic associated with drilling could lead to more sediment and turbidity in the city's reservoirs.

New York City officials praised Friday's announcement as recognition that the state did not have enough information to say whether hydraulic fracturing was safe, and said they welcomed the additional environmental reviews. Last December the city pressed for an all-out ban on drilling in the watershed after a study it commissioned contradicted the state's assessments and found that it would be impossible to protect the city's water supply from the chemicals, waste and disturbance from the drilling.

The announcement drew immediate consternation from both the energy industry and environmental groups.

"Requiring an individual EIS on a well by well basis is too much," said Jim Smith, a spokesman for the Independent Oil & Gas Association of New York.

Kate Sinding, a senior attorney with the Natural Resources Defense Council, said: "It indicates the state is still considering allowing drilling with toxic chemicals in watersheds that supply drinking water to more than 9 million New Yorkers," adding,  "And it's an ominous sign for the water supplies of those in the rest of the state -- which could be subject to drilling under a rushed and fatally flawed environmental review that environmentalists, politicians and residents have said for months needs to be started anew."

Sinding said the state was just avoiding a final decision about how drilling should proceed in the most delicate areas. She said the only way to fully protect New York City's water would be to ban drilling in the watershed altogether.

Gruskin said such a move would be nearly impossible to make.

"At the end of the day an outright ban risks very substantial litigation without a sound basis," he said in a conference call with reporters. "Seventy percent of the property in watershed is privately owned, and to wave a wand and say no drilling can take place in the watershed would deprive people of the right to access natural gas that may be under their properties and there would have to be compensation."