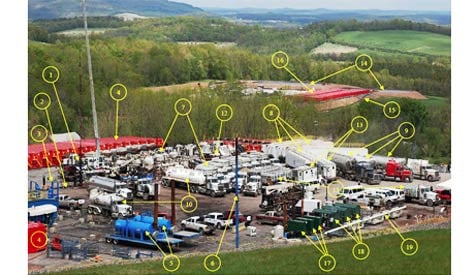 A long-anticipated draft environmental review laying out proposed laws for natural gas drilling in New York’s Marcellus Shale has been released by the state after 18 months of study and several delays. State officials say the guidelines, which are 809 pages long and extremely detailed, address key concerns, including the disclosure of fluids used in the drilling process known as hydraulic fracturing and the on-site handling of drilling waste.

But according to a summary that accompanied the document, which was released just before 6 p.m. Wednesday, it would not ban drilling inside the New York City watershed, a central Catskill Mountain area that supplies drinking water to 9 million people.

"The state’s mitigation proposals are half measures," Manhattan Borough President Scott Stringer said in a news release Wednesday night. "I believe the choice is simple: we either correct this error and ban drilling now, or soon enough the officials entrusted with protecting our environment will be asked to explain why they were asleep at the switch when it mattered most."

Provisions highlighted in the news release would make New York State’s environmental protections more stringent than those in many other drilling areas, but a quick review of the document indicates those provisions may be accompanied by conditions and stipulations, making it unclear exactly where the rules would apply and how they would be implemented.

We are beginning to work our way through the entire document and will be reporting in depth on what we find.

According to the Department of Environmental Conservation’s summary, the document stipulates that:

The review is a supplement to a 16-year-old environmental impact assessment that did not address several of the issues raised by modern drilling in the Marcellus Shale, one of the largest unconventional natural gas deposits in the United States.

New York Gov. David Paterson ordered the Supplemental Generic Environmental Impact Statement in July 2008, one day after a ProPublica investigation raised questions about the state’s preparedness to handle a rush of drilling in the Marcellus Shale. The governor has since made clear that drilling will eventually play a prominent role in the state’s economy.

The ProPublica investigation found that the DEC had told state legislators that hydraulic fracturing was safe, even though the agency had not studied or discussed the sometimes dangerous chemicals that it uses and that later wind up in its waste. The DEC also did not have a plan for where the vast amounts of water needed for fracturing would come from or where it would be treated after it was used.

Fracturing a Marcellus gas well can require more than 3 million gallons and a single well can be fractured as many as eight times. When the DEC’s last impact statement was released in 1992, a typical well required only about 80,000 gallons of water.

In 2008, ProPublica also reported that New York was unprepared to treat the wastewater itself – the DEC said drillers would have to ship it to neighboring Pennsylvania. But ProPublica found that Pennsylvania’s specialized treatment plants don’t have the capacity for it either.

Hydraulic fracturing has made the Marcellus Shale and other difficult-to-reach deposits of gas accessible to drillers. The process shoots millions of gallons of water, sand and chemicals underground at high pressure to break up rock and release gas. According to some estimates, the Marcellus holds enough gas to meet the country’s natural gas needs for more than 20 years.

Figuring out where to get water to fracture the wells is among the water-related questions the DEC is trying to answer. When the water is sucked back out of a well, it can contain natural toxins dredged up during drilling, including cadmium and benzene, which both carry cancer risks.

ProPublica will be examining the details in today’s report. In the meantime, if you spot something send us an e-mail. The environmental review can be found here.