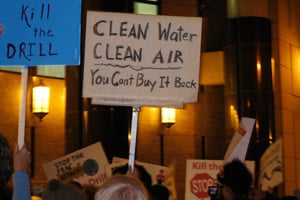 When New York State's environmental agency came out with a draft environmental review of drilling in the Marcellus Shale in September, it set off a flurry of action for environmentalists, industry advocates and the general public.

People were given 30 days -- later extended to 90 -- to digest the highly technical 800-plus-page document and submit comments. They could also voice their opinions at four publichearings.

At stake was the future of gas drilling in New York's portion of the Marcellus Shale, which could produce vast amounts of natural gas, but which some residents fear also could contaminate drinking water sources and the air.

Since the comment period ended on Dec. 31, New York's Department of Environmental Conservation has been assembling and evaluating the public's response, which included a stinging analysis of the plan by the U.S. Environmental Protection Agency. DEC officials aren't saying when the final version of the review will be unveiled, but two department representatives, Yancey Roy and Maureen Wren, did agree to walk us through the process.

They said that since January, DEC employees have been entering handwritten or e-mailed comments into a computer database, along with transcribed comments from public hearings. Those comments are then broken into categories like "surface water" or "groundwater." Six people are currently involved in this part of the process, although at one point 13 people were spending four hours a day entering and sorting the comments.

After that comes the hard work -- actually diving into the substance of the comments to determine how the agency will respond. This department-wide effort involves all the DEC divisions with a stake in the drilling, including the divisions of Air Resources; Fish, Wildlife and Marine Resources; Solid and Hazardous Materials; and Water. Agencies outside the DEC, including the Department of Health and the state Energy Research and Development Authority, are also part of the process. Most of the work is being done by state employees, but in some cases independent consultants may be called in.

When all the comments have been reviewed, the agency will put together a "responsiveness summary," which addresses the comments and suggestions. If you've submitted a comment, don't hold your breath for a personal response -- but this is the section you should check to make sure your comment has been addressed.

DEC Commissioner Pete Grannis will use the responsiveness summary to decide whether to make any changes to the draft. Once any changes are incorporated, the final version will be released and will be used as the DEC's guideline for regulating the industry.

Although the state law that governs the environmental review process doesn't require the DEC to give the public an opportunity to comment on the final document, the agency has the option of doing that. At this point, the DEC says it's too early to say whether it will.