In 1973, L.J. Scott, Jr., was a chemist at the recently created Drug Enforcement Agency, hard at work on a critical breakthrough: a chemical mixture that could identify the presence of cocaine. The trafficking and use of the drug was exploding, and federal and local authorities wanted help confronting the problem. Scott and the DEA wanted something that could be used in the streets — cheap and handy, and, if possible, authoritative.

Scott’s invention became part of drug test kits that agents and officers could carry with them. Scott said he spent nine months validating his new test — first in the DEA’s lab and then with detectives in the field — before declaring success. “The method proposed herein is almost impossible to misinterpret,” he wrote in an internal memo introducing the field test, “and is highly sensitive and specific.”

Chemical field tests in the ensuing decades have served as a ubiquitous, daily tool in law enforcement’s war on drugs. Weeks after Scott declared success, arrests were being made based on the tests’ results. And in less than a decade, there were at least 12 brands of kits, which could test not only for cocaine, but also a variety of other illegal drugs. Police departments across the country purchased and used them by the thousands. In 1990, Scott left the DEA and started his own field test outfit, Scott Company. His longtime top client has been the Houston Police Department.

A ProPublica investigation, the first installment of which was published last week, found that Scott’s kits were central to the wrongful convictions of scores of people in Houston. The tests had either registered false positives or had been misinterpreted by the officers using them. The wrongly accused had pleaded guilty. Since 2014, the Harris County District Attorney’s Office has been working to remedy the wrongful convictions, and the office no longer accepts guilty pleas for drug possession before the crime lab has confirmed the evidence is actually an illegal drug. 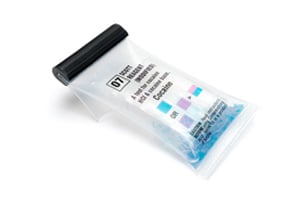 During our investigation, ProPublica interviewed Scott, as well as Charles McClelland, who had served as Houston’s police chief until earlier this year, and Ray Hunt, the head of Houston’s police union. None were aware of how many people had been wrongly convicted based on Houston officers’ arrests, or that the Scott Company kits had been at the center of the disaster.

“I don’t know of jurisdictions that send a man up to the slammer based upon just a field test,” Scott said.

Hunt conceded more training for officers on how to use and interpret the tests would be welcome. “I think it would be important for officers to know that these tests are not infallible,” Hunt added.

McClelland said the embarrassment in Houston should be cause for law enforcement across the country to reconsider the wisdom of relying upon the field tests — including police, prosecutors and judges.

“It’s not working, and we see the negative effects it’s had on our communities and our societies,” he said. “So why should we continue doing the same thing, that’s my question.”

Back in the 1970s, when Scott went to formulate his test for cocaine, chemists had been using a pink liquid called cobalt thiocyanate to help detect the drug for more than four decades. When cocaine combines with the liquid, a blue color forms. But errors plagued the tests, Scott said, because dozens of substances besides cocaine also produce a blue reaction.

Scott experimented with adding other chemicals to the cobalt thiocyanate to improve the results. (All the chemicals would be released in a pouch containing glass vials.) Scott’s final formulation was a three-step test. It still began with cobalt thiocyanate. A blue reaction signaled the suspect drugs might be cocaine. In step two, he used hydrochloric acid to turn the solution pink again. In step three, chloroform was supposed to cause positive tests to separate into two layers, pink on top and blue on the bottom.

But Scott’s claims about the reliability of the three-step process proved overly confident. In 1975, a pair of toxicologists at Duquesne University in Pittsburgh documented false positives in the Scott test with mixtures that included the numbing agent lidocaine. Drugs sold on the street are often combinations of several substances, making the color reactions in field tests harder to decipher or rely upon. Some officers even injured themselves when breaking the vials of acid.

For some reason, when he got into the business himself, Scott abandoned the improved three-step model of test and returned to the single chemical interaction. It is unclear why. In our interview, he said he had been able to become competitive in the industry by keeping his prices low. He said he uses cheaper plastic containers, and charges police less than $1 per kit, about half the price of the leading manufacturers. He eventually won the business of large police departments across Texas, Alabama, Florida and North Carolina. Scott’s kits do not reference the risk of false positives. The term appears with “disclosures and disclaimers” on the company website: “it is possible (though unlikely) to receive a false positive result under certain conditions.”

Today, Scott’s products remain in use throughout the country, and they are a staple of Houston’s police department, which bought 9,000 of them in 2014, the last year for which records are available. Yet his kits have undergone next to nothing in the way of improvement over the decades. Indeed, in 1997, an industry rival expressly highlighted the shortcomings of the Scott test while applying for a patent.

“Despite these known disadvantages, in the last fifteen years no one has proposed or commercialized an improved test kit which would ameliorate these problems,” a chemist wrote in the patent documents.

During an interview in January, Scott defended his innovation and its continued use.

“No field test is fail safe,” he said. “Any field test can give you an erroneous result, even if you run two or three field tests in a row. You have to do that in a sequence and you can get greater reliability using that technique. But it burns up tests, it burns up time, and it puts an officer in the role of a chemist. The result you get would be more reliable than a single test, but it’s still not conclusive.”

He said common sense and the rest of the justice system reduced the risk of people being arrested or taking pleas as a result erroneous field tests.

“Usually, the guy involved in drugs knows he’s dealing in drugs,” he said. “And if he is innocent, and it’s not a drug, he’s probably not going to plead. If he is dealing in cocaine or meth or heroin, the odds are he’d love to have a plea.”

Police don’t rely purely on chemistry, but a combination of that and their day-to-day experience to recognize when drugs are present, Scott maintained.

“The officer in the field probably has a reasonable expectation in his area, in his experience,” he said. “He knows what drugs are prevalent in his area. And he knows what they look like. He has a reasonable cause, or he has a reasonable suspicion what kind of drug he has before he runs a field test in many cases. If he’s used to seeing crack, and it looks like crack, and it’s packaged the way crack normally is packaged, there’s a pretty good chance it’s crack. And if the field test comes up and says, ‘Yeah, that’s crack, all right,’ then he has an even better reason.”

We asked Scott whether departments should be requiring all field test results to be confirmed in a lab.