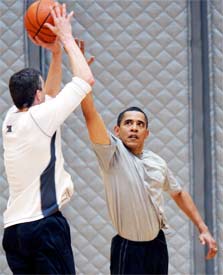 The ethics agreements that nominees for the Obama administration are required to file offer an unprecedented peek into the new president's high standards. But how high is too high?

Last month, we posted a batch of these first-person letters, written and signed during the nomination process, outlining steps each nominee will take to avoid potential conflicts of interest and other ethical dilemmas.

Now we've received more, and this new batch further highlights a pitfall we noticed before: many of the letters contain promises by nominees to stay away from decisions seemingly at the core of their job descriptions. Check out the letters. The new ones we have added are in red.

Other ethics agreements require divestitures and resignations that seem completely unnecessary. And – making the logic of the agreements even more difficult to parse – some people are allowed to hang on to investments.

Kim N. Wallace, President Obama's nominee for assistant secretary of legislative affairs at the Treasury Department, promises not to participate in "any particular matter" to which Barclays bank, which now owns his former employer, Lehman Brothers, is a party.

This reminds us of Gary Gensler, Obama's choice to head the Commodity Futures Trading Commission, who vows in his letter not to make any decisions that might impact Goldman Sachs' ability to pay him a $6,700-per-year annuity, even though Goldman Sachs has an active commodity futures business.

Secretary of Education Arne Duncan, who was head of Chicago's public schools, promises not to participate in any matter "in which Chicago Public Schools is a party or represents a party," and Tammy Duckworth, assistant secretary of Veterans Affairs, is barred from making decisions about the Illinois Department of Veterans Affairs, of which she was formerly director.

Health and Human Services Secretary Kathleen Sebelius, whose ethics agreement we just obtained, joins a list of officials subject to broad geographic limitations based on their former jobs.

During her first year in office, Sebelius, the former Kansas governor, is barred from making decisions in which the State of Kansas is a party, a pledge similar to that made by the chairwoman of the White House Council on Environmental Quality, Nancy Sutley, who "will not participate personally or substantially in any particular matter involving specific parties in which the City of Los Angeles is a party or represents a party."

Lanny Breuer, who has been confirmed as head of the Criminal Division at the Department of Justice, was forced to resign from the boards of the Columbia College Alumni Association.

Sebelius had to hand her share of a Michigan lake house – which was held in a family partnership – over to her husband, her letter says.

Duncan was not allowed to retain his position on the board of the South Side YMCA in Chicago.

And William Scott Gould, deputy secretary of the Department of Veterans Affairs, agreed in his ethics letter to resign from his position as class agent for the Roxbury Latin School Annual Fund. He was also required to divest shares he held in IBM, where he was a vice president. But he was allowed to keep his Coca-Cola and United Parcel Service stock, with his letter offering only the explanation that the likelihood of his being involved in "matters affecting the interests" of the two companies is "remote."

Again, here's a full list of the letters. Make sure to let us know if you find anything, too.

And if rummaging through documents is your thing, send a note to Amanda Michel, our editor of distributed reporting, and she'll e-mail you next time we update this feature.