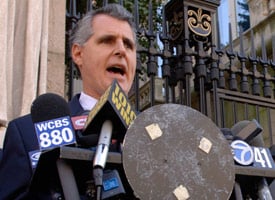 New York City officials who last month called for a ban on natural gas drilling near the city's upstate reservoirs have taken the next step in what they argue is a fight to protect the city's drinking water from contamination. Yesterday, City Council Environmental Protection Committee Chairman James Gennaro announced (PDF) that his committee will hold an emergency public hearing next week to discuss the safety of the drilling and hear public concerns.

Gennaro's hearing follows an July 18 letter (PDF) the New York City Department of Environmental Protection sent to state environmental officials challenging the state's assertion that drilling in the Marcellus Shale would not contaminate the city's unique, unfiltered water system, which serves 9 million New Yorkers. The letter demanded a one-mile protective buffer around each of the city's reservoirs. At the time, Gennaro argued for even tighter regulation, calling for a total moratorium on drilling in the Catskill watershed, an area that supplies most of the city's water and covers most of the shale.

"Gas drilling in the middle of our drinking water supply is one of the most potentially harmful policies to come out of Albany with regard to our health, our environment and our wallets," Chairman Gennaro said yesterday.

Correction, Sept. 3, 2008: This article originally stated that the letter sent from the New York City Department of Environmental Protection to New York state officials was dated Aug. 6. It was dated July 18.