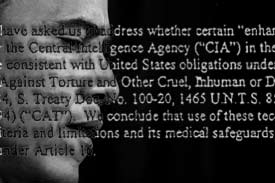 Last week, we noted that while the administration promised not to prosecute CIA interrogators who acted within the legal limits laid out by the now-released "torture memos," it made no such promise for the Justice Department lawyers behind the memos. In remarks to reporters today, President Barack Obama reiterated his promise and more clearly suggested that the lawyers who signed off could face legal consequences.

When the memos were released last week, the administration was silent about consequences for the Office of Legal Counsel officials who gave authoritative advice to counterterrorism agencies in those years. Much of that advice was repudiated, in waning months, by the Bush Office of Legal Counsel itself as "not sustainable," "doubtful," "not supported by convincing reasoning," "highly questionable," "not satisfactory," "unpersuasive" and/or simply "incorrect."

Today, the president reiterated that prosecution "would not be appropriate" for interrogators "who carried out some of these operations within the four corners of legal opinions or guidance that had been provided from the White House," according to the Washington Post.

But Obama expressed no such opposition to subjecting senior officials to investigation or prosecution. While maintaining his general caution against "getting so politicized that we cannot function effectively," he declined to reject the notion of congressional investigations or criminal prosecution.

"With respect to those who formulated those legal decisions, I would say that that is going to be more of a decision for the attorney general," he said. If there is going to be "a further accounting," Congress might consider a bipartisan or independent commission, he suggested.