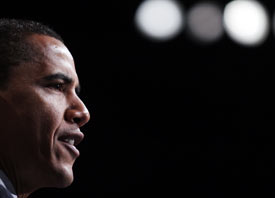 Yesterday, we looked at President-elect Obama’s stance on transparency. As we noted, Obama’s record on the issue isn’t spotless, but he did make promises during the campaign to run a far more transparent presidency. This morning, Obama’s transition Web site, change.gov, offered some details on "using cutting-edge technologies" to create "a new level of transparency, accountability and participation for America's citizens."

Among the ideas listed on the site:

We’ll be watching to see what happens after January 20th.