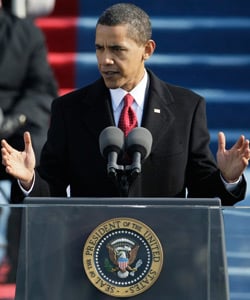 Editor's Note: As an Inauguration Day special, we thought we'd offer some perspective from an in-house expert. Our general manager, Dick Tofel, is also the author of Sounding the Trumpet: The Making of John F. Kennedy's Inaugural Address.

It is a tricky business to analyze in an hour words that people will read for centuries -- much can be missed. For instance, the New York Times Quotation of the Day for 48 years ago tomorrow is not President Kennedy's "ask not what your country can do for you," but rather "let us never fear to negotiate" -- a good line (John Kenneth Galbraith's favorite, especially given that he had written it), but not the line that endures in popular memory. Nevertheless, here goes.

First, a word to those -- as with a few with whom I've already discussed the speech -- who may have been a bit disappointed. Obama faced an enormous rhetorical challenge today.

John Kennedy, who gave the most recent immortal inaugural, had, up to that point, never in his life given a great speech. We remember him as deeply eloquent, but all of the words we recall him speaking he spoke during his presidency, none before it. He was not considered the best orator among the 1960 candidates -- Adlai Stevenson (who did not deign to run actively) and Hubert Humphrey (who ran all too actively) would have won those accolades.

Obama, on the other hand, won the presidency, in significant measure, on the power of his words -- from the "red states/blue states/United States" of his 2004 Convention keynote, to the Jefferson-Jackson Day dinner speech that saved his campaign in Iowa in 2007, to his Iowa and South Carolina victory speeches, to his Philadelphia speech on race and Rev. Wright to his Convention acceptance, and beyond to his Grant Park "defining moment" victory speech. He was, today, his own very hard act to follow.

The result, today's speech, seems to me to have been two speeches, stitched together, one largely prosaic, one highly poetical. The prose address concerned our economy and our politics. It even used phrases like "data and statistics" and "short-cuts or settling for less." It was a speech of humility and simplicity, a call to responsibility. Almost all modern inaugurals include a passage from the Bible; in this spirit, Obama's choice was the injunction "to set aside childish things."

This prose included admissions of common failings, in the sense of the failings of us all -- "our collective failure to make hard choices and prepare the nation for a new age," a timeless warning that "a nation cannot prosper long when it favors only the prosperous," and a denunciation of "the petty grievances and false promises, the recriminations and worn out dogmas, that for far too long have strangled our politics." Obama's enemy here is cynicism, but "what the cynics fail to understand is that the ground has shifted beneath them."

The high point of this prose portion of the speech is the declaration that "our time of standing pat, of protecting narrow interests and putting off unpleasant decisions -- that time has surely passed. Starting today, we must pick ourselves up, dust ourselves off, and begin again the work of remaking America."

Obama seemed to find his voice when addressing the wider world. He did so confidently, and in contrast to his treatment of the economy and politics, the passages on international affairs are implicitly highly critical of his predecessor. Thus, his message "to all other peoples and governments who are watching today, from the grandest capitals to the small village where my father was born: Know that America is a friend of each nation and every man, woman and child who seeks a future of peace and dignity, and that we are ready to lead once more."

If any of Obama's words today are likely to be carved in stone, it may be these: "Our power alone cannot protect us, nor does it entitle us to do as we please... our power grows through its prudent use; our security emanates from the justness of our cause, the force of our example, the tempering qualities of humility and restraint."

In the end, however, Obama returned to prose, albeit in all its power. It is not an accident, for instance, that the words he linked to George Washington are actually from Thomas Paine's pamphlet Common Sense. Common sense may be the unspoken watchword of this speech. It is an old-fashioned notion, but this new and newest-fangled of presidents refers self-consciously to old values: "Those values upon which our success depends -- hard work and honesty, courage and fair play, tolerance and curiosity, loyalty and patriotism -- these things are old. These things are true. They have been the quiet force of progress throughout our history. What is demanded then is a return to these truths."

Outcomes will be the test of the new administration, and the great orator, who could certainly have moved the crowd more today, may have recognized that the fact of his presidency is today's great symbolic moment, and that deeds matter now more than words. From today forward, President Obama becomes accountable to "create new jobs," rebuild the electric grid, "raise health-care quality and lower its costs," "transform our schools," and "responsibly leave Iraq to its people" -- the speech promised each of these. Words can help, but results will rule.