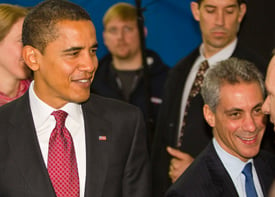 In an effort to begin rolling back the Bush administration's influence on federal regulations, now White House chief of staff Rahm Emanuel issued a memorandum (PDF) yesterday essentially freezing pending Bush-era rules. But dozens of rules that were finalized by the Bush administration before he left office will be hard to reverse.

Over the past couple of months we have been closely tracking the former administration's sprint to approve or change as many federal rules as it could before Obama took the Oval Office. By some estimates, the Bush administration pushed forward well over 100 proposed regulations in its waning days.

"That is traditionally the first thing a new president does," Reece Rushing, the Center for American Progress' director of regulatory and information policy told us. "We were expecting him to initiate a review of outgoing rules that hadn’t been published yet."

The Emanuel memo harkens back to a similar move made by Bush's chief of staff when the former president was inaugurated on Jan. 20, 2001. That day, Andrew Card sent out a memo (PDF) to Bush's appointed agency chiefs asking them to begin reviewing the slew of last-minute rules issued by Bush's predecessor, Bill Clinton.

But it's not going to be easy to actually roll back the regs.

As we have reported previously, Obama can only extend the review process for those rules that have not yet gone into effect. Rules go into effect 30 to 60 days after they have been finalized, depending on their impact to the economy.

By our count, 27 of the 66 midnight regulations we have been tracking have reached this critical phase.

This was no accident. In May 2008, White House chief of staff Joshua Bolten wrote a memo (PDF) urging agency heads to publish all final rules in the federal register by Nov. 1, 2008, so they would be in effect when the next administration took office.

Rules that are in effect will be more difficult to undo. To rescind them, the Obama administration will have to start the rulemaking process all over again. Some of them are already being challenged in court by public interest groups. In these cases, the Obama administration could come to an agreement with the group that is suing by promising not to enforce the contested Bush rule and issue a new one in its place.

Another option that has been discussed among Democrats in Congress is the Congressional Review Act, which would require Congress to vote to disapprove any rule finalized within about six months before Congress adjourns.

This route requires an appetite for a bit more political risk. Using the Review Act doesn't necessarily guarantee that a rule will be voided, because opponents may not be able to garner the necessary votes.

The Congressional Review Act has only successfully been used once, in 2001, when the Republican-dominated Congress rejected a Clinton-backed ergonomics rule aimed at improving workplace conditions and equipment for workers. Critics said the standard was too broad and too costly.