Fast forward two years and little has changed. In the first four months of enrollment in Health Source RI, the Blue Cross plan has seen its market share grow, as hard as that is to believe—to nearly 97 percent.

A similar situation is playing out in California.

In 2011, Wellpoint’s Anthem Blue Cross had a 37 percent market share, followed by 20 percent for Kaiser Permanente and about the same for Blue Shield of California, according to the Kaiser Family Foundation, which crunched the figures.

In the first three months of enrollment under the Affordable Care Act, the same three insurers remained in the lead: Anthem captured 31 percent of the market, Kaiser had about 19 percent, and Blue Shield increased its share from about 20 percent to nearly 30 percent.

HealthCare.gov, the federal system that is handling enrollment for 36 states, has not yet released data on which plans consumers chose. In addition, some states running their own exchanges have not released their data. (It’s possible the Centers for Medicare and Medicaid Services will release plan-specific information when it releases its February totals, expected in the next couple days.)

Based on the states that have released the information (including California, New York, Washington, Rhode Island and Minnesota), experts are divided about how the market will ultimately shake out.

Some expect the new markets to closely resemble the ones they are replacing.

“Generally speaking, I'd expect the big plans in the individual market before the ACA to remain the big plans,” said Larry Levitt, senior vice president for special initiatives at the Kaiser Family Foundation (not affiliated with Kaiser Permanente). “They have brand recognition and the resources to put into direct-to-consumer marketing.

“The insurance market was highly concentrated pre-ACA and that's likely to continue, at least in the near future.”

Part of the premise of the Affordable Care Act was that it would make health care affordable and provide consumers with meaningful insurance choices, regardless of their health status. In the years before the law was passed, the individual insurance market was seen as dysfunctional—with few choices and high costs. In 2010, in 17 states, the insurer with the largest share of the individual market had more than 65 percent of enrollees in the state, a Kaiser report found. 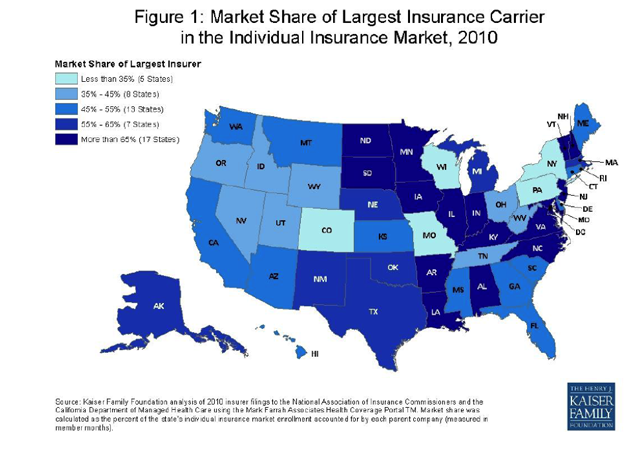 The Huffington Post analyzed data from nine state exchanges and found that the “status quo is mostly holding in several states -- including Rhode Island, California and Connecticut -- where companies with the biggest market shares in 2011 are leading enrollments via the state's exchanges.” 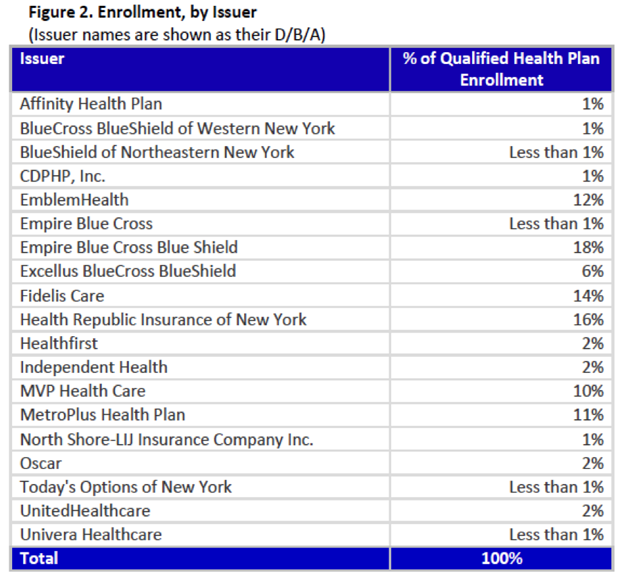 Peter Newell, director of New York Hospital Fund's Health Insurance Project, told Modern Healthcare last month that Health Republic’s success was not a shock. “They had very competitive rates in almost every county they were in,” he said. “These co-ops are starting with zero covered lives. It's important for them to get enrollments early on, and it looks like Health Republic has done that.”

Caroline Pearson, a vice president at Avalere Health, a consulting firm that is tracking the rollout of the health reform law, said it’s too early to say what the final pattern will look like. “Thus far, the trend seems fairly consistent with what we expected,” she said in an email. “Regional plans, particularly Blues, are dominating the market. However, the sample is so small that it is hard to know how other plans are doing, especially in states where they priced competitively.”

Another challenge, Leavitt said, is that many insurance plans are also selling the same plans outside of the exchanges and the figures being released by states do not include these figures. Consumers who are not eligible for subsidies have little reason to purchase their coverage through the exchanges.

If an insurance company is not able to attract enough interest in 2014, the inaugural year of the exchanges, it may choose to drop out for next year, further reducing consumer choices.

Dr. Scott Gottlieb, a resident fellow at the conservative American Enterprise Institute in Washington, D.C., said he believes the insurers that choose to participate in exchanges will be those that also serve patients enrolled in state Medicaid programs. That is because they already have assembled networks of providers willing to accept payments lower than those paid in commercial plans.

“This is really structured like a Medicaid product with very broad mandates but low pricing, so you need to have a cheap provider network to service it,” Gottlieb, a former deputy commissioner of the Food and Drug Administration, wrote in an email. “I don't think the same insurers that provide commercial coverage and have better networks are also going to be able to simultaneously maintain cheap networks to service the government business and vice versa.”

This is already playing out, Gottlieb says, pointing to insurance giants like Aetna and Cigna, which are focusing on their commercial business and have relatively modest participation in Obamacare exchanges, compared with Wellpoint and Humana, both of which are investing more heavily in government programs.

“When this happens, what it will mean is that what remains in the employer sponsored insurance market, broadly speaking, will be white collar services employers, the kinds of firms that demand a better benefit and are willing to pay up for it,” he wrote. “This will mean the Cignas and Aetnas will have to move further away from the cheaper product they would have sold in the exchange to continue servicing this remaining employer segment.”

Have you tried signing up for health care coverage through the new exchanges? Help us cover the Affordable Care Act by sharing your insurance story.