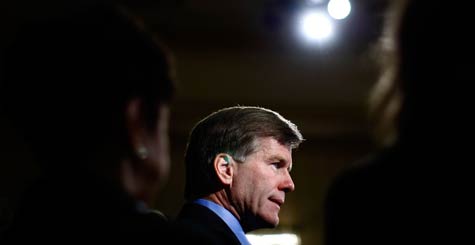 Republicans and Democrats are circling their wagons and calling out their counterparts when it comes to the stimulus.  Rep. John Boehner, the House minority leader, recently did some fundraising for Bob McDonnell, a Republican stimulus skeptic who is running for governor in Virginia, leading a DNC spokesman to ask:  "Why is Bob McDonnell more than happy to take John Boehner’s money when it benefits his political campaign, but not willing to take money for roads and infrastructure projects benefiting all Virginians?" While McDonnell said he would not urge Republican legislators to change the state unemployment system so it could qualify for additional stimulus money, he has said that, if elected, he would continue to accept stimulus funds.

Meanwhile, showing that the political minority can be as snippy as the majority, Rep. Eric Cantor, the House Republican whip, blasted Massachusetts’ use of $4 million of stimulus money  for a bike trail that will connect two existing trails. The problem, he wrote in his weekly stimulus update, is that the state opted not to use other available federal fundsallocated for those kinds of a projects. "Once the new trail is completed," Cantor wrote in the update, "the Manhan bikers will finally have access to the Taco Bell in Northampton." The House Republican Stimulus Alternative, he says, would have ensured that money didn’t go for bike trails to Taco Bell, or anywhere else.

And finally, The Denver Post reports that the biggest stimulus contract for a business in Colorado goes to … (drumroll) … Lockheed Martin,  which received a $166 million contract to accelerate the design and construction of NASA’s planned Orion spaceship. (We’ve previously noted how NASA had used little of its stimulus money.)