Desperate to acquire masks to slow the spread of the novel coronavirus, two federal agencies gave nearly $20 million in contracts to a newly formed California company without realizing it was partly run by a man whose business activities were under sanction by the Federal Trade Commission, court records show.

On Tuesday, a U.S. District Court judge froze the company’s assets, most of which had come from the Department of Veterans Affairs in a $5.4 million mask deal. A story by ProPublica revealed Jason Cardiff’s role in operating VPL Medical LLC in June.

Cardiff was sued by the FTC in 2018 in connection with an alleged fraudulent scheme involving smoking cessation strips and male sexual enhancement pills and was under court order to report his income to a receiver. Cardiff was recently held in contempt for violating that court order. By not disclosing his involvement with VPL, court records allege Cardiff was essentially hiding information from the FTC about money his company was getting from another federal agency, the VA.

California business filings show that VPL was incorporated just four days before it won the VA deal in April, and it went on to win a $14.5 million no-bid contract the next day from the federal office in charge of the national stockpile. Those filings do not mention Cardiff as a company owner. The FTC alleges in court records that Cardiff and a partner, Bobby Bedi, were equal partners and had each paid themselves at least $420,000 from the VA money.

In May, when ProPublica asked VPL officials about Cardiff’s role, Bedi said Cardiff was “a consultant.” In a recent filing, the court receiver said that characterization “strains credibility” and included photos of a company organizational chart showing the two co-leading VPL.

When the VA signed the VPL deal, the agency had been told by a company representative that Cardiff was the CEO of the company, according to emails included in the FTC’s latest court filings.

That VPL representative, Stacey Barker, was paid more than $257,000 for helping to close the VA deal.

While the company is not on the list of banned federal contractors, a quick Google search reveals Cardiff had been repeatedly accused of fraudulent schemes.

The attorney representing Cardiff and VPL, James B. White, argued that the FTC filings are the agency’s perception, not the truth, and said corporate filings do not include Cardiff’s name.

“What I’m suggesting to you is that is not the only interpretation of the documentary trail,” White told ProPublica. “Is it not possible in your world that the payments to Mr. Cardiff were for a consultancy?”

The VA, which has struggled to provide protective equipment to medical workers at the largest hospital system in the country, said the company successfully provided 8 million surgical masks. VPL has yet to deliver under its separate contract with the U.S. Department of Health and Human Services, according to the company’s lawyer and court records. 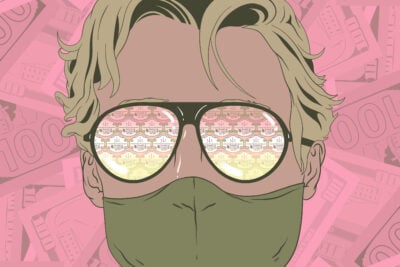 The Secret, Absurd World of Coronavirus Mask Traders and Middlemen Trying To Get Rich Off Government Money

The federal government and states have fueled an unregulated, chaotic market for masks ruled by oddballs, ganjapreneurs and a shadowy network of investors.

Cardiff and Bedi did not respond to requests for comment. A VA spokeswoman said VPL met basic criteria for a contract award.

“If you have concerns about the federal laws governing the federal contracting process, you should direct them to the relevant congressional committees of jurisdiction,” said the spokeswoman, Christina Noel.

In 2018, the FTC sued to shut down Cardiff and a different company operated by him and his wife, describing it as a pyramid scheme. It alleged that the firm involved robocalling people and making “false and unsubstantiated claims for dissolvable film strips advertised for smoking cessation, weight loss, and male sexual performance.”

A federal court issued an injunction, shutting down the Cardiffs’ business and freezing their assets. In March, Cardiff was found in contempt of court for, among other things, hiding 1.5 million Canadian dollars (about $1.1 million) in assets. The case is ongoing, with the most recent injunction freezing VPL assets.

The FTC alleged that Cardiff was funding a lavish lifestyle through an account he had opened in the name of his 90-year-old father.