When Army Sgt. Victor Medina returned home from Iraq in the summer of 2009, his life was a shambles. His tour had been cut short after he suffered a concussion during a roadside blast. Though his injury wasn't visible, he struggled with balance and noticed that his ability to read, think and even talk had changed for the worse.

But in the spring of 2011, Medina became one of the first patients at the National Intrepid Center of Excellence, the military's $65 million, state-of-the-art treatment center for brain-injured soldiers.

During his three weeks at the Bethesda, Md., center, the staff developed a rehabilitation program designed specifically for Medina. His recovery has progressed rapidly ever since, he and his wife, Roxana Delgado, told ProPublica and NPR.

Medina has continued to work from El Paso, Texas, by videoconference with a speech therapist based at the center, and he said his stutter is improving. After his injury, he had struggled to read more than a paragraph; now he says he can read and absorb two pages in one sitting. Medina also was ordered to stop driving after his injury, but he told ProPublica and NPR that he has regained his ability to do that, too.

"It's like night and day," Delgado said of his improvement.

The couple believes that Medina benefited dramatically from media attention. In June 2010, ProPublica and NPR published stories about the couple's struggle to get medical treatment for Medina at Fort Bliss, Texas, where he was stationed at the time. The Army's vice chief of staff, Gen. Peter Chiarelli, denounced the reports at a hearing before the Senate Armed Services Committee as a "disservice ... to everyone." But a year later, Chiarelli flew the couple to Washington so they could talk privately to top commanders about their battles at Fort Bliss, and how to improve treatment for troops with TBI.

Last year, Medina became one of NICOE's first patients. He received more than 100 hours of personalized treatment from neurologists, psychologists, physical therapists and others at the center, a NICOE spokesman said. Medina also had access to some of the center's virtual-reality equipment, which is used to simulate ordinary civilian activities like crossing the street and driving a car.

Delgado and Medina have become advocates for victims of traumatic brain injury, or TBI, the signature injury of the Iraq and Afghanistan conflicts. Last week, Delgado was invited to attend President Barack Obama's State of the Union speech as a guest of Rep. Silvestre Reyes, D-Texas, whose district includes part of Fort Bliss.

In an interview with ProPublica and NPR before the speech, Delgado said the invitation was "very empowering because it tells me that leadership and people in Congress are paying attention to traumatic brain injuries," she said.

But not every soldier with a brain injury has been as fortunate as Medina. 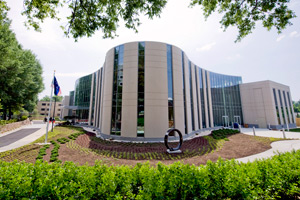 By comparison, recent estimates show that nearly 230,000 soldiers have been diagnosed with traumatic brain injuries, Stueve said. "We aren't going to make a huge dent in that population," said Stueve. Most of the center's $35 million budget is spent on research, not clinical care, he noted.

To get into the program, a service member must be referred by a physician at his or her local military hospital, agree to live with other soldiers in a group house near the facility, and plan to continue military service after treatment.

Brain-injured troops who don't plan on staying in the military have to rely on U.S. Veterans Affairs Department hospitals for treatment once they get out. But VA hospitals don't have the same resources or equipment as NICOE.

Stueve said troops at NICOE benefit from being treated by an "inverted system" in which a soldier has the opportunity to work with perhaps 10 doctors at once, instead of being at a hospital where there might be just one doctor for every 10 patients. The advantage, he said, is that a patient isn't shuffled to separate referrals from multiple specialists over the course of treatment.

Stueve said the center "doesn't keep data" on how many soldiers are rejected, and handles only 20 patients at a time for about four weeks of concentrated treatment.

"The real story here is patient experience," Stueve said. "The service members, when they come here, they feel like they are in control, and they play a huge part in their own treatment."

Delgado agrees but said she knows "that's not the case for all service members, because some are denied a chance to go to NICOE. This should be the standard of care for everybody."

The Pentagon plans to expand the NICOE system to other bases, Stueve said, but that effort could be stymied by pending defense budget cuts. The defense department is drafting a plan to cut $259 billion from its budget over the next five years.

The military is already having problems with its budgets for TBI and post-traumatic stress disorder. In a recent report to Congress, the Government Accountability Office said the defense department can't provide reliable data on how it spent $2.7 billion allocated to treat soldiers with brain injuries and psychological health problems.