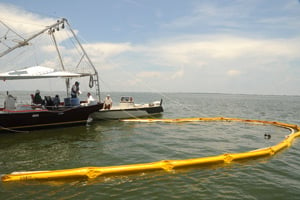 Last week, we reported that experts and health officials are concerned that Gulf cleanup workers aren't getting enough safety training. On Thursday, C-SPAN asked the head of the Occupational Safety and Health Administration about our reporting -- and he agreed that "more training is needed" for many spill responders.

We spoke with OSHA's director, David Michaels, after that interview, and he said the agency is working with BP to increase the safety training for workers on vessels at sea.

Michaels said he did not know exactly when the new classes would begin, but said it should be within days: "We've moving as quickly as we can."

The course will increase in length from four to eight hours, and will address new subjects including workers' rights and protection from chemical hazards, Michaels said. Like the current training, it will be taught by contractors hired by BP, with monitoring and advice from OSHA.

The longer classes will be provided to offshore workers in the Vessels of Opportunity program -- which employs local boat operators and crews in cleanup activities -- but not to shoreline responders who are cleaning the beaches. In his appearance on C-SPAN, Michaels said that by the time oil reaches the beaches, it has been weathered long enough that it has "lost all of its volatile chemicals," eliminating the risk of airborne exposure.

"We're aiming for the workers on the Vessels of Opportunity, whose exposure to weathered oil has increased," Michaels told us. He said the additional training is crucial because these workers are now collecting oil-soaked boom at sea in addition to laying fresh boom. (Last week, a health official involved in planning the training told us that the current curriculum doesn't include chemical inhalation, the health effects of dispersants, or the risks of direct contact with weathered oil.)

There are currently 2,630 local boats in the cleanup program, according to the latest data from Unified Command, the interagency spill response team made up of BP, Transocean, the Coast Guard and numerous federal agencies. The Unified Command's website has no information about the total number of people on the boats, and a Unified Command spokeswoman said she did not have that information.

As we noted last week, the Louisiana health department is tracking complaints from cleanup workers who are continuing to report health problems that they believe are related to chemical exposure, including vomiting, dizziness, and nose and throat irritation.

Michaels also dismissed concerns raised in recent reports by McClatchy Newspapers that OSHA's ability to ensure compliance from BP is hampered by limits on his agency's jurisdiction, which extends only three miles offshore. He said that OSHA's participation in the Unified Command allowed it to protect worker safety beyond its usual boundary.

"We are working through the Unified Command system," Michaels said. "Just because there is a line three miles out there, that has no impact."

An OSHA spokesman told us that the agency would provide us with more information -- including the curriculum of the new course -- as soon as it became available. We'll update you when we hear more.