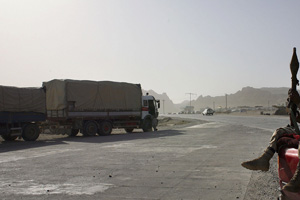 About twice a week, convoys up to 50 vehicles long snake westward on Highway 1 in Afghanistan, ferrying supplies to coalition bases in Helmand province. The road runs through the Maywand district in Kandahar province, where more than 30 civilians have been wounded or killed in the past four years by the private guards tasked with protecting the convoys, according to the district's senior Afghan intelligence representative.

A U.S. officer in the area, Capt. Casey Thoreen, tells the paper that the heavily armed guards -- mostly Afghans themselves -- are like "gun-toting mercenaries with probably not a whole lot of training." The Afghan district chief said that most of them are heroin addicts.

So who hired them? Army Times finds an answer elusive:

Until recently, the identities of the companies for whom the security guards worked remained shrouded in mystery, even from the coalition headquarters whose troops they are supplying. [Lt. Col. Jeff French] said he requested information on the companies through his higher brigade headquarters -- 5th Stryker Brigade, 2nd Infantry Division -- but had yet to receive any word back.

An International Security Assistance Force (ISAF) spokesman said the convoy security workers are employees of the logistics contractors running the convoys. Those contractors work for one or several of the ISAF, NATO or 26 countries operating in Afghanistan. As a result, he said he did not know how much is spent on the security firms or which companies had hired them.

As for the coalition's response to the allegations of misconduct, a spokesman, Col. Wayne M. Shanks, told Army Times that the coalition forces weren’t involved in vetting the security guards, but "all credible allegations of improper actions by contractors are fully investigated."