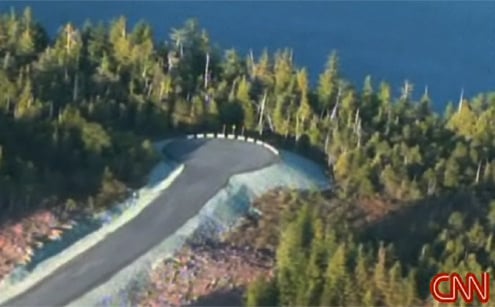 After refusing to answer questions for more than a week about Gov. Sarah Palin's administration's construction of a $26 million dead-end road, a McCain campaign spokeswoman told CNN earlier this week that Gov. Palin had no choice. But Alaska and federal officials say otherwise, and the record shows that she canceled a comparable project.

As we reported in detail last week, Palin's administration oversaw the construction of the Gravina Island Highway, a 3.2-mile access road to the "Bridge to Nowhere." Since it was obvious in 2007 that the $398 million bridge from Gravina Island to Ketchikan would never be built, government watchdogs urged the Palin administration to put the brakes on the project. Construction began in June of 2007, more than six months after Palin took office, and completed last week.

The McCain campaign did not directly address our questions about the road, but on Tuesday, a CNN report (which includes some striking aerial shots of the empty cul-de-sac at the road's end, seen above) included a detailed response from the campaign. Spokeswoman Meg Stapleton explained that the governor "had no option" but to build the road, because an earmark had "dictated" that the money had to be spent on it.

When CNN pressed as to whether Palin could have stopped construction, Stapleton responded with a statement that "under ordinary circumstances, Gov. Palin would not have allowed the Gravina Road project to move forward, but given the federal earmark and because the contract for the road was already signed before she got into office, the governor was left no viable alternative."

But the governor did have a viable alternative. Gov. Frank Murkowski (R) signed the contract for the road on Dec. 1, 2006, three days before he left office. Palin could have cancelled that contract upon taking office, according to Alaska Department of Transportation spokesman Roger Wetherell. In such cases, contractors are reimbursed for any expenses incurred in association with the project.

For instance, in her first month in office, Palin cancelled a $18.6 million contract to build a one-lane, 11-mile gravel road out of Juneau. That contract had also been awarded by Murkowski at the end of his term, but Palin, judging the project wasteful and the contract award insufficiently transparent, terminated it. The state reimbursed the contractor for $65,500 in expenses, Wetherell said.

Gov. Palin also had a "viable alternative" when it came to the earmark. It's true that the Gravina Island Highway presented a more difficult case than the Juneau road, which was funded entirely with state money. But it's not true that the earmark forced Palin to spend the money on the road. Palin could have opted not to use the money, and Congress has the power to send it to other federal needs, said Federal Highway Administration spokesman Doug Hecox.

There is, in fact, a prominent example of such a thing happening recently with another earmark from that same legislation, the mammoth, pork-filled 2005 transportation bill. Rep. Don Young (R-AK) earmarked $10 million for the Coconut Road interchange project in Florida, but the earmark became a controversy after news reports pointed out that a local developer, who stood to gain from the project, had thrown Young a fundraiser shortly before he inserted the earmark. Soon after, the local planning organization in Naples, Florida voted to return the $10 million and ask that it be used for a broader highway project. Congress subsequently amended the earmark in a technical corrections bill earlier this year.

Young, of course, was also responsible for the $223 million in earmarks for the "Bridge to Nowhere" in the 2005 bill, along with Sen. Ted Stevens (R-AK).

The McCain campaign did not reply to our request for comment.