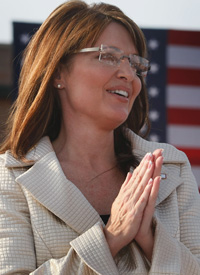 Revelations about Alaska Gov. Sarah Palin have been coming fast and furious. (Asked why so many tidbits were coming out on Labor Day, a top adviser for the McCain-Palin campaign told the New York Times, "We are going to flush the toilet.") Lost in the flurry were some new developments in so-called Troopergate.

Palin has been accused of firing the Alaska public safety commissioner in July for refusing to do the governor's personal bidding and fire a trooper who was Palin's former brother-in-law. The commissioner, Walt Monegan, has said Palin's aides and family repeatedly pressured him to fire the trooper, Mike Wooten, who was involved in a nasty divorce with Palin's sister.

Palin, who appointed Monegan, initially didn't offer details for Monegan's firing. Instead Palin explained she just wanted to move in a new direction. All of which has prompted an investigation by a bipartisan panel in Alaska's legislature. Palin subsequently said that Monegan hadn't been doing enough to fill state trooper vacancies and wasn't a "team player on budgeting issues."

So what's new in the past few days? Well, Governor Palin has lawyered up: The state has hired a private attorney, an Anchorage lawyer named Thomas Van Flein to represent Palin in the investigation. Apparently the task would normally go to Alaska's attorney general, except in this case he's among those who allegedly pushed Monegan to fire the trooper and, says Van Flein, could be a potential witness.

The investigation is scheduled to release its report Oct. 31, four days before election. "It's likely to be damaging to the governor," the legislator heading the investigation, Democratic State Senator Hollis French, told ABC News.

The Wall Street Journal notes that some viewed the move to hire a private counsel as a "tactic to delay the case" until after the elections. Palin's new lawyer has gotten off to a quick start and is currently challenging the authority of the investigation.

The Journal also points that following the news that Palin's 17-year-old daughter was pregnant, the McCain campaign has "asked Palin's friends to refrain from speaking to the media."