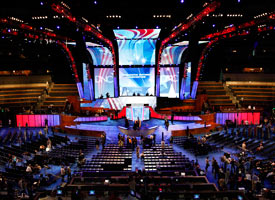 It's no surprise that government watchdogs (PDF) take the former view and lobbyists the latter.

This year's conventions are the first to occur under the 2007 lobbying ethics and reform bill, which among other things, further limited what gifts a lawmaker could receive and what sort of events they could attend. Free meals are out, but hors d'oeuvres are OK -- the so-called "toothpick rule." And lobbyists and corporations can no longer sponsor events to honor particular lawmakers (quite popular at the 2004 conventions), but events that honor a group of lawmakers are, according (PDF) to the House ethics committee, OK.

Confronted by sometimes contradictory rules (the Senate ethics committee prohibits the group loophole), some lobbying firms and ethics lawyers have thrown up their hands and decided against sponsoring any events at all. Rather than parse just what sort of food can be offered (meatballs but not steak, continental breakfasts but no eggs, cheese quesadillas but not chicken or beef quesadillas), they've decided it's not worth it. One exasperated lawyer complained to the New York Times, "We are having to decide if a group is a cover band, a string quartet, or a name band." (The Minnesota Agri-Growth Council has decided to give lawmakers the option of paying $25 to hear Styx during its event at the Republican convention just in case.)

But while the new rules have certainly made the way more difficult, they have by no means eradicated corporate or lobbyist money from the conventions. The Democratic National Convention has been made possible with $40 million in private money (about $58 million for the Republican convention), most from corporations. Those donors are no political neophytes. In total, according to the Campaign Finance Institute, the 173 organizational donors have spent about $1.5 billion in campaign contributions and lobbying since 2005.

And while some lobbyists and corporations may have opted to stay home, there will still be plenty of places for lawmakers to stab their toothpicks. At its Party Time Web site, the Sunlight Foundation has created a searchable database of parties at the convention. There are at least 370. As the Wall Street Journalreported, it sounds like there will still be some fun to be had (links to the invitations are posted at Party Time):

When the Democratic Party holds its convention…, members of Congress will be able to hear singer Kanye West at an all-expenses paid party sponsored by the recording industry.

They can play in a poker tournament with Ben Affleck, courtesy of the poker industry. They can try to hit a home run at Coors Field, home of the Colorado Rockies, thanks to AT&T Corp. Free drinks and cigars will be on offer at a bash thrown by the liquor industry.

As the Journal notes, gift rules mean that the cigars will simply have to be "lower-grade" than in past years. Oh well.