More than half the 2,000 people who received pedestrian tickets in Duval County, Florida, from 2012 to 2016 saw their driver’s licenses suspended or their ability to obtain one limited, according to an analysis by the Florida Times-Union and ProPublica.

The tickets, which carry what can seem like a modest $65 fine, can have more significant consequences for those who get them and refuse to pay or are unable to do so.

Over five years, a total of 2,004 pedestrian tickets were issued in Duval County, which is comprised almost entirely by the city of Jacksonville. Of those tickets, 982 people who failed or were unable to pay the fine lost their driver’s licenses or their ability to obtain one, according to the analysis.

The license suspensions help answer a question at the center of a Times-Union/ProPublica investigation of pedestrian tickets in Jacksonville: What are the consequences for individuals swept up in the Jacksonville Sheriff Office’s aggressive enforcement of some two dozen often obscure pedestrian statutes?

Last month, the Times-Union/ProPublica investigation showed that 55 percent of the tickets given in recent years went to blacks despite the fact that they make up only 29 percent of the city’s population. Blacks were similarly overrepresented in the 932 tickets that led to license suspensions — 54 percent.

As of Tuesday’s City Council meeting, three elected officials on the body have called on Sheriff Mike Williams to order his officers to stop writing pedestrian tickets. Council member Garrett Dennis asked the Office of General Counsel to review what authority the council had to compel him to do so. In addition to voicing her support for that measure, council member Katrina Brown asked for a noticed meeting focused on pedestrian infrastructure and enforcement.

The Jacksonville Sheriff’s Office has insisted that blacks have not been targeted in the issuance of pedestrian tickets, and said it saw no reason to review the investigation’s findings of a disproportionate impact on African Americans. The office said those receiving tickets could contest them before a judge, and that it would address any erroneous or improper ticketing with additional training of officers.

Losing one’s license in a sprawling city like Jacksonville can make aspects of daily life seem near impossible, whether you’re a mother shuttling children to school or a trucker trying to secure your next job.

In an interview Monday, Brandes said that a driver’s license suspension is often a Floridian’s first experience with the criminal justice system. Then, he added, it can “snowball” from there.

The state senator’s bill, which he plans to submit for the third time, would allow for those who demonstrate financial hardship to perform community service if they are unable to pay civil fines. He said the bill has never made it to a full vote by the legislature. Clerks of court in Florida stand to lose about $40 million annually if the law governing driver’s license suspensions is modified.

“Unfortunately, the clerks of courts have been funded based on transaction volume, and one of their highest-margin transactions is driver’s licenses,” Brandes said.

The Times-Union and ProPublica identified the 932 suspensions by using data from the Duval County Clerk of Courts and the Florida Court Clerks and Comptrollers.

The tally is surely conservative. For instance, it does not include people who had their licenses suspended, but then reinstated after eventually paying the fine.

“Who would have thought that someone who gets a walking infraction is going to be barred from getting a driver’s license?” said Samuel Brooke, deputy legal director for the Southern Poverty Law Center’s Economic Justice Program. “I think it shows the absurdity of linking the ability to drive to the ability to fulfill a financial obligation in the criminal justice system.” 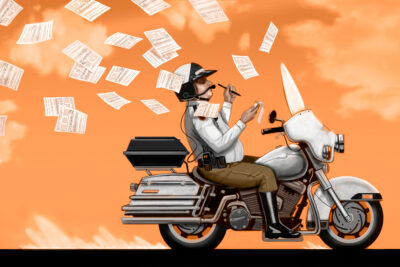 The Times-Union/ProPublica analysis also found that 68 juveniles between the ages of 12 and 17 had their chance of getting a driver’s license suspended — meaning any application for a license would require the ticketed youngster to pay off the fine.

“The idea of suspending the ability of someone in the future from getting a license when at the time they are a juvenile, they are a child, and they are being punished for a child activity, a child behavior, in a way that is really severe,” said Brooke of the SPLC. “This isn’t go spend an hour in the principal’s office. This is you won’t be able to drive, you won’t be able to drive until you come up with a way to pay off this fine, and that’s just frankly unconscionable.”

State Rep. Tracie Davis, a Jacksonville Democrat, said that she, too, would be looking into ways to change the laws governing pedestrian citations and driver’s license suspensions.

Davis added that people might not grasp the seriousness of the ticket, which then gets left unpaid, and leads to the suspensions.

“It’s just extreme,” Davis said, “and it has extreme after-effects for people of color.”

What’s more, 132 of the tickets, issued for crossing outside of a crosswalk, led to license suspensions, but didn’t conform with state law and should never have been issued, according to the analysis. The infraction applies only when people cross in between intersections with traffic lights, but was routinely cited without regard for traffic light placement.

The sheriff’s office has previously said it has asked the local state attorney to give it guidance on the proper application of the crosswalk statute.