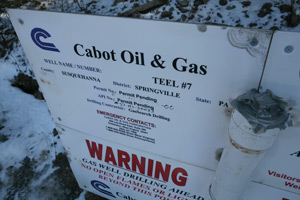 After three chemical spills in the past nine days, and following a history of environmental problems over the last year, Pennsylvania officials have ordered Cabot Oil and Gas, one of the most active natural gas companies in the state, to stop its hydraulic fracturing operations in Susquehanna County pending an intensive review.

"The department took this action because of our concern about Cabot's current fracking process and to ensure that the environment in Susquehanna County is properly protected," DEP north central regional Director Robert Yowell said in a news release distributed this morning.

The stop-work order, which was accompanied by new citations issued for the third spill, will interrupt development of seven new wells that Cabot is currently drilling, and intending to fracture, in Susquehanna County. The citations were similar to those levied earlier in the week, including a failure to contain fracturing fluids.

The state's order gives Cabot two weeks to re-submit an "accurate" Pollution Prevention and Contingency Plan and Control and Disposal Plan for its well pad sites in the county. It gives the company three weeks to complete an engineering study of the equipment and practices used for hydraulic fracturing.

“There were unique elements of the location that experienced the three incidents and it was not necessary to force a shutdown of all fracturing activities,” said Cabot spokesman Ken Komoroski, explaining that fluids were piped farther than usual at the well site in question. “However, Cabot understands the department has an important job to do.”

In interviews earlier this week, Komoroski underscored that the spills had happened under the watch of two of its contractors: Halliburton, one of the world’s largest drilling service companies, and Baker Tanks, a tank transport company.

In recognition of those circumstances, Pennsylvania will require Cabot to post its new pollution prevention plan at each well site and make it available to all its contractors, something that is not normally required in the state.

You can read the full press release here (PDF).